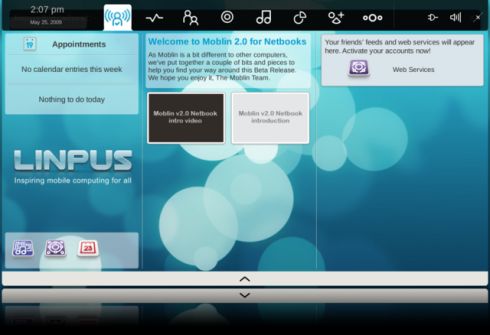 Linpus Linux Lite is a Linux operating system designed for netbooks with slow processors and small screens. The Linux versions of the Acer Aspire One netbook have been using Linpus since day one. The team behind the operating system have a few new things in the works. First, Linpus will be showing off an updated version of its instant-on product at Computex. But the much more interesting product that will be on display is an updated version of Linpus based on Moblin V2 beta.

Moblin is another Linux distribution optimized for netbooks. The project was started by Intel, and is now run by the Linux Foundation. And while Linpus, Xandros, and a few other operating systems have tried to make the experience of using Linux on a netbook easier with large program launchers and a few other tweaks, Moblin goes much further by trying to change the way we interact with a computer. In fact, the Moblin interface almost feels more like a cellphone or internet kiosk UI than a traditional computer interface.

Linpus is the first company I’m aware of that’s developed a new operating system based on Moblin. Users will be able to select either the Moblin user interface or a Linpus UI. Linpus says the operating system boots in less than 15 seconds, and includes a “live desktop” which provides quick access to bookmarks, communication tools, applications and media.

It’s not clear whether the new version of Linpus will be available for end users to download or if Linpus is primarily targeting the operating system at computer makers (like Asus, perhaps?) who could preinstall the OS on netbooks before selling them to consumers.

You can find more photos of the Moblin-based version of Linpus Linux Lite at UMPC Portal.