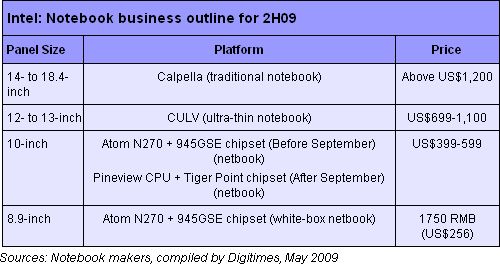 Intel could begin phasing out the Atom N280 chip and GN40 graphics chipset. Digitimes reports the move is  due to low demand. The Intel Atom N280 CPU runs at 1.66GHz, which is only moderately faster than the 1.6GHz clock speed of the older Atom N270 CPU. The N280 also has faster bus speed and the GN40 chipset is designed to offer somewhat better graphics performance. But while, Acer, Asus, and a few other companies have opted to use the newer chips in their latest mini-laptops, many other companies continue to pump out machines with the older Intel Atom N270/945GSE chipset.

That’s not to say that Intel won’t eventually replace the Atom N270. The Atom N280 was actually an off-roadmap chip that was designed to help fill the demand for netbook processors while Intel prepared its next generation Pineview processors and Tiger Point chipsets, which are due out this fall. This new chipset will feature a faster processor and GPU while using even less power than current chips.

DigiTimes also reports that Intel has put together a netbook reference design for white-box vendors. It has an 8.9 inch display, Intel Atom N270 CPU, 945GSE chipset, 512MB of RAM, and 8GB or 16GB of flash storage. In other words, the only thing that really sets it apart from every other 8.9 inch min-laptop on the market today is the fact that it will run on Moblin Linux. This white-box netbook could go for as little as $256.