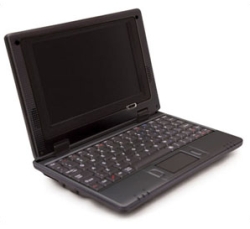 I haven’t fully jumped on the Google Android for netbooks bandwagon. The operating system is designed for cellphones with low resolution displays and slow processors. And the number of applications available for Google Android pales in comparison to the huge variety of apps that you can run on Windows or Linux netbooks. But today I’m thinking that maybe there are some netbooks that would be right for Google Android. Because Asus Eee Hacks reports that Ingenic is porting Android to run on the Xburst CPU.

If you’re not familiar with the Xburst processor, it’s a low power, low performance MIPS based CPU that’s used in a number of dirt cheap mini-laptops including the 3K Razorbook 400 and Skytone Alpha 400. These processors often run at 400MHz and power netbooks with 7 inch displays, 256MB to 512MB of RAM, and 1GB to 4GB of flash-based storage. In other words, aside from the larger screen and keyboard, they’re a lot like cellphones, so maybe an operating system designed for cellphones isn’t out of the question.

Typically Xburst netbooks use custom Linux operating systems and run a handful of applications including a version of the Firefox web browser and Abiword word processor. But launching applications that run well on faster computers can take a little time and patience on these underpowered machines. So perhaps instead of running desktop apps like Firefox and Abiword, the solution is to modify a mobile operating system designed to offer a different kind of experience. Google Android might not look like a typical desktop operating system. After all, you can only have one window open at a time. But that might not be so bad on a netbook with a 400MHz processore and a 7 inch, 800 x 480 pixel display. Especially if you can pick up that netbook for $150 or less.