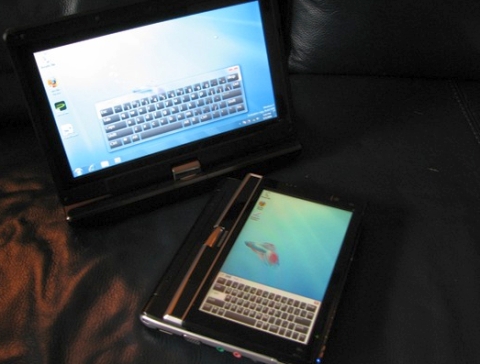 Microsoft publicly launched Windows 7 RC yesterday. And while we already knew that Windows 7 beta ran pretty well on virtually any netbook you cared to install it on, it’s nice to see that the release candidate of Microsoft’s upcoming operating system performs admirably as well. I’ve seen a number of reports suggesting that it’s just easy to install on most Intel Atom powered netbooks as earlier builds of Windows 7. I probably won’t get around to testing it out myself until this weekend, but I don’t expect to run into any problems.

Chippy at UMPC Portal had a chance to try something a bit different though. He’s currently using a Gigabyte T1028M Touch Note netbook, which has a touchscreen display. His netbook has been modified a bit, and has a solid state disk instead of a hard drive. But he reports that for the most part, the Windows 7 RC installation process was a snap. The operating system recognized the touchscreen immediately. And after running Windows Update, the WiFi drivers worked too.

The only thing that didn’t work out of the box was the 3G modem, but Chippy reports that he was able to get it working with the standard drivers, which presumably either came on a support DVD or were downloaded from the Gigabyte web site.

He also installed Windows 7 RC on a Kohjinsha SC3, which required digging around for a few additional drivers.