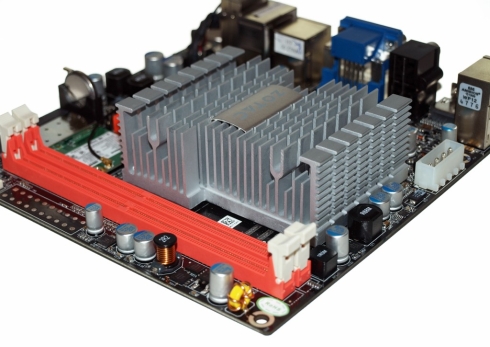 I had high hopes for the NVIDIA Ion platform. Not so much for my netbooks, but for my home theater PC, or HTPC. I’m currently using a two or three year old desktop computer with a dual core AMD Athlon processor to record and play television using an HDTV tuner and Snapstream’s BeyondTV software. But I’d love to put a smaller form factor computer with lower power consumption next to my TV instead. And while you could probably record and play TV with a nettop like the Acer AspireRevo and a USB TV tuner, there are two things that the Intel Atom CPU and NVIDIA GeForce 9400M graphics processor just can’t handle very well right now.

First, while I have an HDTV tuner, I don’t have an HDTV yet. I just use the tuner to grab high quality over the air TV broadcasts. In order to save space on my hard drive, BeyondTV automatically compressed each recording to DivX. And I have a feeling that would take forever on an NVIDIA Ion based system. Second, while the NVIDIA graphics processor handles 720p and 1080p video playback beautifully (including Blu-Ray playback), it’s no help at all when it comes to Flash video from sites like Hulu and YouTube. That’s because Adobe Flash doesn’t take advantage of the NVIDIA GPU, it relies entirely on the CPU. And the sad truth is that I have yet to see an Intel Atom powered computer that can play Hulu video well in full screen mode on a 1366 x 768 or higher resolution display. And in this day and age, an HTPC that doesn’t play web video is kind of a non-starter.

So I was really excited to see that the folks at Hot Hardware reviewed a new Zotac ION-based motherboard that not only uses the NVIDIA Ion platform, but also happens to have a dual core Intel Atom 330 CPU. Unfortunately, while the system plays full screen Hulu video better than systems with single-core Atom processors, it’s still a bit choppy.

In other words, I won’t be building a new HTPC around an NVIDIA Ion powered motherboard any time soon.

There is some reason to be hopeful. The problem isn’t entirely with the hardware. There may be a software solution. NVIDIA has already demonstrated video transcoding software that can take advantage of the GPU, thus performing as well or better on a low power ION-based system as on higher end computers with faster CPUs. Companies like BeyondTV could integrated that technology into future personal video recorder applications to automate the process. Or I could just buy a much, much larger hard drive so I wouldn’t need to save the space. And Adobe could retool its Flash software to include support for GPU acceleration, which would allow netbooks and nettops with slow Intel Atom processors and higher performance graphics processors like the NVIDIA GeForce 9400M to play full screen Flash video from sites like Hulu more smoothly.

But until that happens, I’ll be hanging onto my beat up old HTPC or looking for another alternative.

You can check out Hot Hardware’s video of the Zotac Ion motherboard playing Hulu video and surfing the web after the break. Blog ION Based has also uncovered a series of pictures from PC Pop of upcoming ION-based netbooks and nettops, all with HDMI ports.