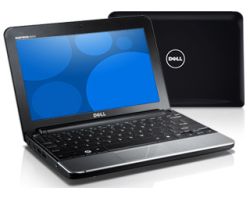 Dell has officially launched the Inspiron Mini 10v, a slight variation on the existing Inspiron Mini 10 netbook. News about the 10v first leaked a few days ago, but today Dell confirmed the netbook’s existence in a blog post. Oh yeah, it’s also available for order with a starting price of $299.

Like the Inspiron Mini 10, the Dell Inspiron Mini 10v has a 10 inch display and an Intel Atom processor. But there are plenty of differences in the details. First, the cheaper Mini 10v does not have an “edge to edge” display like the one found on the Mini 10. And the 10v maxes out at 1024 x 576 pixels, while you can customize your Mini 10 order to include a high resolution 1366 x 768 pixel display.

The Mini 10 also uses Intel’s more energy efficient Atom Zxx series processors, while the 10v comes with an Intel Atom N270 or N280 CPU. And while Dell will eventually make the Mini 10 available with 2GB of RAM and/or a TV tuner, it sounds like those options will not be available for the Mini 10v.

Dell is also launching a new IdeaStorm section, where the company is asking you what you’d like to see in future netbook products.

For more details on the Dell Inspiron Mini 10v, check out the video after the break, where you’ll see how the Mini 10v stacks up against the Mini 10 and the Mini 9.