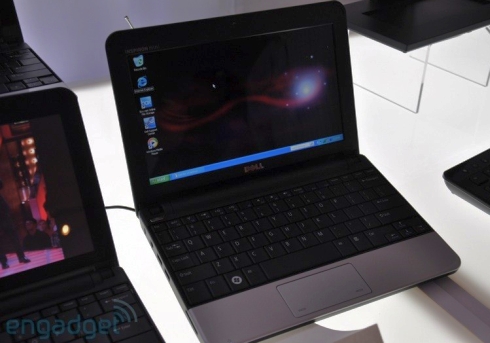 The folks at Laptop Magazine and Engadget both got a chance to get up close and personal with the new Dell Inspiron Mini 10v that was officially launched yesterday. And that means photos. lots and lots of photos.

As expected, one of the most noticeable differences is cosmetic. While both netbooks have 10 inch displays, the Mini 10 has an “edge to edge” display, which essentially means that there’s a single piece of glass the stretches from one of the screen to the other, although around the edges it covers the screen bezel, not an LCD display. Still, the visual effect is quite nice. The Mini 10v,on the other hand, takes a more traditional approach and has a plastic bezel surrounding the screen.

Most of the other changes are under the hood. The Inspiron Mini 10v has an Intel Atom N2xx processor, which offers slightly better performance than the Atom Zxx processors in the Mini 10 line at the cost of increased power consumption. The Mini 10v also won’t have some of the more advanced options available on the Mini 10, like the higher resolution 1366 x 768 pixel screen or the integrated TV tuner, which by the way, Engadget reports should be available this summer.