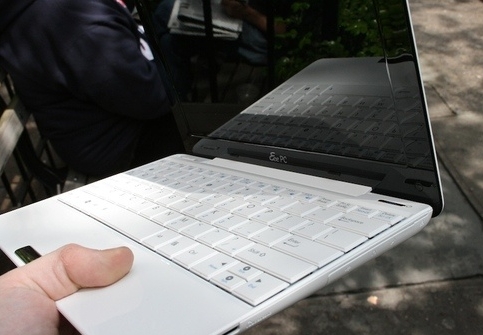 Asus has announced the US pricing for the Eee PC 1008HA Shell netbook. It’ll sell for about $429, which isn’t much more than you’ll pay for the Asus Eee PC 1000HE which is thicker and heavier, but which features a higher capacity, user-replaceable battery.

The Asus Eee PC 1008HA the thinnest and lightest 10 inch netbook in the Eee PC lineup, weighing just 2.4 pounds and measuring less than an inch thick at its thickets point. It features a nice looking new keyboard, and all the specs we’ve come to expect of Asus netbooks including 802.11b/g/n WiFi and Bluetooth 2.1. The only down side is that the laptop has a non-removable battery, which Asus says will run for about  6 hours per charge. There appears to be some evidence that Asus is working on a new model that will have a user replaceable battery.

Asus officially launched the netbook in Hong Kong and Taiwan this week as well, where it’s selling for the equivalent of about $578 US.

Gizmodo reports that the netbook should be available for pre-order on May 18th with a $20 discount, bringing the price temporarily down to $409.