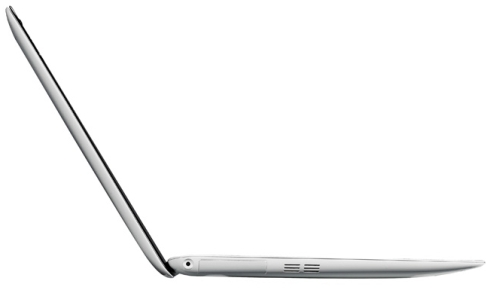 Asus has been teasing us with pictures of its new thin and light Eee PC 1008HA “Shell” netbook for a few months. Asus officially launched the nebtook in Taiwan yesterday, and Akihabara News reports that it’s already available for purchase in Japan, while Register Hardware suggests that it could be available in the UK as early as next week.

The Eee PC 1008HA sports a 1.66GHz Intel Atom N280 CPU, 1GB of RAM, a 160GB hard drive, and a 10.2 inch, 1024 x 600 pixel display. So the specs aren’t particularly spectacular. But design-wise, the laptop is a big departure from Asus’s earlier netbooks. It’s thinner, lighter, and the display is on a hinge which folds down below the body of the computer, which makes the mini-laptop seem much smaller than its Eee PC cousins (although other laptop makers including MSI and HP have been doing this fold-below-the-body thing for a while now).

Of course, the slim design means that the Eee PC 1008HA won’t get the stellar battery life you find on models like the Asus Eee PC 1000HE which has 6 cell, 8700mAh battery that can run for 7 to 9 hours.

You can read more about the Asus Eee PC 1008HA on the Asus UK web site or in the Liliputing Product Database.