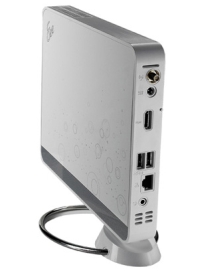 The Eee Box B206 is the first member of the Asus Eee Box family to feature discrete graphics and an HDMI port. While most Intel Atom nettops feature integrated Intel GMA950 graphics, this model sports an ATI Mobility Radeon 3450 GPU with 256MB of video memory. It also has an HDMI port instead of the usual DVI port. In other words, while the Eee Box B206 has a low power, low performance CPU, a lot of people were hoping that this wold be the first of Asus’s tiny nettop computers that would make sense to stick next to your HDTV and use as a home theater PC. Register Hardware has posted a review with some good news and some bad news.

The good news is that the Eee Box B206, which comes with a remote control for use from your couch, is better suited for handling HD video than most netbooks. The bad news is that this isn’t saying much. The nettop could handle 720p DivX or H.264 playback fairly well, but struggled with 720p Quicktime and WMV9 videos. 1080p video was another story, with H.264 videos playing reasonably well (if not perfectly), but all other codecs causing the computer to struggle.

Register Hardware didn’t test the Eee Box B206 with online video. But I’m going to go out on a limb and predict that it handles standard definition video reasonably well and chokes up on higher resolution videos. The problem is that Adobe Flash puts a lot of strain on the CPU, and the Intel Atom processor just isn’t up to the task of pumping out full screen Flash video on high resolution displays, as I discovered when I tested the Eee Top all-in-one computer from Asus. If Adobe can work on offloading some of the processing power to graphics processors, perhaps we’ll start to see low power devices like the Eee Top, Acer AspireRevo, and Eee Box B206 capable of playing full screen videos from Hulu, YouTube and other sites.