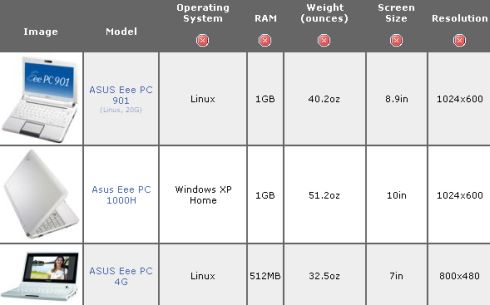 In an interview with the Wall Street Journal this weekend, Asus CEO Jonney Shih admits that this rapid fire introduction of product after product might have hurt the company more than it helped.This year, the company plans to introduce just a few new netbooks.

According to the Wall Street Journal, Asus introduced a new model every 6 weeks on average in 2008. If you count the minor variations in hard drive capacity, operating system, and other features, I think you could even argue that Asus introduced more models than that.

Of course, 2008 was a year of adjustments in the netbook space. While the Eee PC 701 was wildly popular, it had some limitations that kept many consumers from seriously considering picking it up. First, it had a low resolution 7 inch screen and tiny keyboard. Second, it used an old Intel Celeron processor that wasn’t as energy efficient as it could have been. Third, it originally ran Linux only. Fourth, there was no hard drive option, which meant that the netbook was sturdier thanks to the lack of moving parts, but also had limited storage capacity. And fifth, the tiny power adapter was easy to carry around, but took forever to fully charge a battery.

Of course, some people were happy to live with those compromises, and you can still find some Asus netbooks with smaller screens, solid state disks instead of hard drives, and Linux. But Asus netbooks became much more popular once the company began offering machines that weren’t saddled with those limitations.

The problem is that when you introduce dozens of laptops with very similar names you confuse customers. And if you’re not really sure you understand a company’s product offerings, it might be easier to just go pick up a netbook from a company like Dell, Acer, or HP where there are fewer options to choose from.

6 replies on “Asus CEO: Yup, we introduced too many models last year”