Joe Rybicki is a freelance writer who’s spent the last 13 years covering the videogame and technology industries. He lives in the suburbs of Cleveland, Ohio, and laughs at your commute. You can read more of his writing on various topics at joerybicki.com. 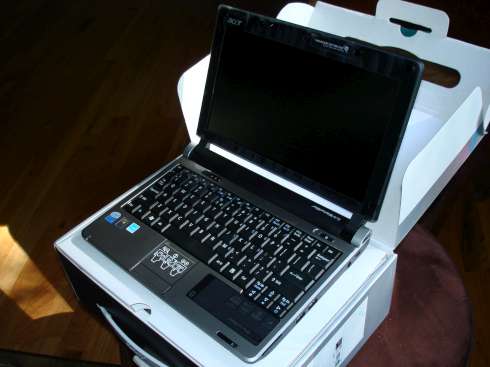 In the summer of 2002, I moved from Chicago to San Francisco, in the process going from a five-minute car commute to an hour-long commute by ferry. It was time to get a laptop. So I did my research, I saved up some cash, and I bought a Sony Vaio PCG-SRX99. It had a 10-inch screen, weighed just over three pounds with the battery, and was an inch and a half thick. It had an underpowered processor — an 850MHz Celeron — and almost nothing in the RAM or HDD department (256MB and 20GB, respectively). It was essentially a proto-netbook, heralding most of the features that, six years later, we would come to associate with the netbook form factor. Except one:

(To be fair, that was relatively cheap for a notebook in those days, especially one small enough to throw in a man-purse and light enough to carry along on a commute that involved a walk of nearly a mile through downtown San Francisco. But still: nearly two grand with tax!)

I’m telling you all this so that you’ll understand my shock when I finally made the leap to a real netbook and discovered that it was a superior product in nearly every way…and for less than one-quarter the price.

The object of my affection is the Acer Aspire One D250, newly launched here in the U.S. and retailing for around $375 in “diamond black” with a 6-cell battery. (Subtract $25 for any other color, and another $25 for a 3-cell battery.) And superior though it may be in performance to my trusty old Vaio, it’s extremely similar in function.

Which is to say, it does everything a traveler needs, in a ridiculously small package. How small? It’s 1.25″ thick at its thickest point, with the somewhat angled battery attached. It’s less than an inch thick at the front. And it’s well under three pounds. It’s quite small. 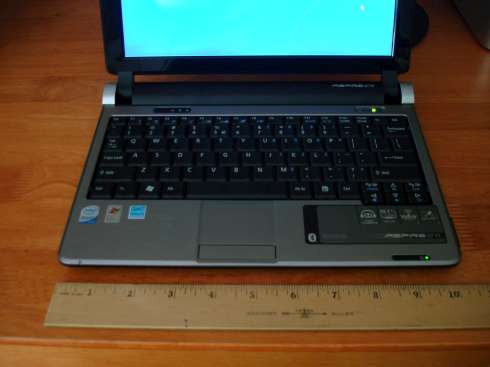 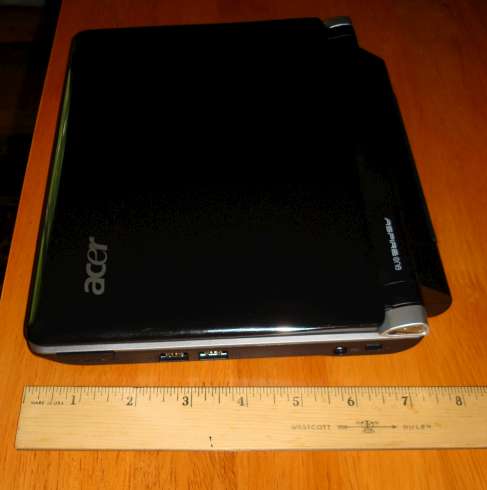 This is what I look for in a laptop, and it’s the reason I started looking into the netbook form factor in the first place. Ninety percent of my travel is for business, and so most of the time when I’m on the road — or in the air — I’m all business. I don’t care much about gaming on the road; I have a smokin’ desktop at home for that. I don’t care about heavy video or photo editing; that’s what my Mac is for. I don’t need it to be a media center, a mobile recording studio, or a DVR. I need it for three things: e-mail, web browsing, and word processing. Everything else is just gravy.

The D250 does all these things perfectly well, and it’s easily powerful enough to do them all simultaneously, with a screen full of Firefox tabs, plus Pidgin and iTunes running in the background. But of course, even these simple tasks can go way off the rails if care isn’t taken with the keyboard design, and Acer earned big points with me for two important design choices: One, the keyboard is physically responsive and includes a fair amount of travel. This is key (ow, sorry) for me because this newfangled “chiclet”-style keyboard that style-savvy PC manufacturers have embraced just does not work for me. Since I type almost exclusively by touch it’s vital that I be able to feel the keys depressing fully. I know this is a matter of personal taste for a lot of people, but as a professional writer I am very particular about my keyboard feel. (This is, in fact, one of the main reasons I abandoned the Asus Eee PC 1000HE, which was the forerunner in my research until I actually tried typing on the thing. One word: Ew.)

So far my only complaint is the tiny trackpad. Acer tries to maximize its usability by adding multi-touch and various gesture-based commands, but no matter how much functionality you try to cram on there, you’re still talking about a space that’s 1.5″ by 2″ — there just isn’t a whole lot of real estate. I’ll be curious how easily I adapt to it, especially compared to the generous trackpad on my old Vaio.

Anyway, next week I’m taking the D250 with me to E3, the yearly videogame mega-convention, where it will accompany me on four days worth of jaunts from one end of the Los Angeles Convention Center to the other. It’s going to be subject to some rigorous testing in the areas of battery life, WiFi connectivity, portability, and reliability.

So I’ll have a more complete report when I return. But so far, after just a couple days of experimentation, I’m extremely optimistic that this little wonder is going to come through with flying colors.