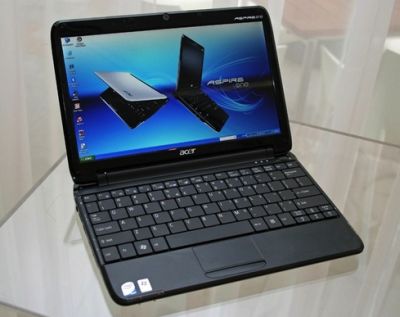 The Acer Aspire One 751 is the first mini-laptop from Acer to sport a power saving Intel Atom processor and an 11.6 inch, 1366 x 768 pixel display. Unfortunately, Pocket Lint found that this high resolution display is much better suited to displaying images than high definition video, thanks to the pokey processor. While most netbooks use the 1.6GHz Intel Atom N270 CPU and 945GSE chipset, the Acer Aspire One 751 uses an Intel Atom Z520 CPU and US15W chipset. The result is that the laptop handles standard definition YouTube videos just fine, but balks at HD video playback.

On the bright side, the laptop is super slim and the folks at Pocket Lint said it was awfully attractive. They didn’t love the keyboard, saying it had a bit too much flex. But the keys seem to be large and evenly spaced.

The standard 3 cell, 2200mAh battery lasted about three hours in the Pocket Lint test, which wouldn’t be too bad if the test was performed with WiFi on. But it wasn’t. In other words, you’ll be lucky to get 2 to 2.5 hours of run time if you actually want to connect to a wireless network. So if you’re planning on using this laptop on the road you might want to invest in an extended battery. Acer will make a 5200mAh battery option available.