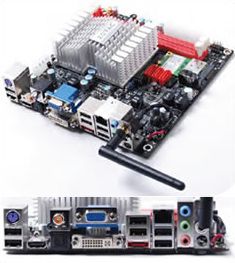 Computer part maker Zotac has unveiled two new Mini-ITX motherboards that will let you put together a system built around the new NVIDIA ION platform. The platform combines an Intel Atom CPU and an NVIDIA GeForce 9400 GPU to provide better graphics performance than you’ll get from most Intel Atom powered netbooks that use integrated GMA 950 graphics. For instance, NVIDIA ION powered computers can handle Blu-ray video playback.

The Zotac IONITX-A-U comes with a dual core Intel Atom 330 CPU and GeForce 9400 graphics, while the IONITX-B-E has a single core Intel Atom chip and the same GeForce graphics processor. Both motherboards support up to 8GB of RAM, and have 2 memory slots. They also have HDMI, DVI, and VGA outputs, as well as a Ethernet jacks, a few SATA ports, USB ports, and 802.11n WiFi.

The systems will be released first in Japan with the single core model going for around $200 and the dual core version costing $300. So if you want a low power nettop with decent video performance and you’d rather not go with the Acer AspireRevo, it looks like you may soon be able to build your own system.