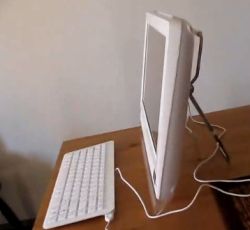 Asus just sent me an Eee Top all-in-one computer to review over the next few days. While the Eee Top isn’t a netbook, it’s something I’ve been keeping an eye on for a while.

Like any netbook, the Eee Top is designed to be an affordable alternative to high end systems that work in a similar fashion. In fact, it looks a lot like an iMac or the HP TouchSmart series of all-in-one desktop computers. The Eee Top looks more like a monitor than a computer. It sports a 15.6 inch touchscreen display with the CPU, motherboard, hard drive, and other components tucked away behind the screen. But unlike the iMac or HP TouchSmart series, this computer sells for under $600. (In fact, Amazon is currently charging just $522 for the Eee Top

The difference is that it uses cheaper, slower parts. There’s no Intel Core 2 Duo CPU in here. Instead you get a 1.6GHz Intel Atom N270 CPU — the same processor found in so many netbooks. It offers decent performance for common tasks like web browsing or watching video, but you probably wouldn’t want to use this computer for CPU-intensive tasks like video editing or playing modern video games like Crysis.

That said, I’ve been using the Eee Top to do some light blogging work over the last few hours and I’ve found that it handles the following tasks respectably:

If you don’t need a powerhouse on your desk, the Eee Top could be a decent replacement for whatever desktop or laptop is currently taking up space on your desktop. It has a decent widescreen 1366 x 768 pixel display, reasonably loud built in speakers, and comes with a decent keyboard and USB optical mouse. As an added bonus you also get a touchscreen, some custom software to make the computer easier to use with a touchscreen, 6 USB ports, a multi-format flash card reader, and an integrated 802.11b/g/n WiFi adapter.

If the screen were larger, I’d be tempted to put this computer in the living room as a replacement for a more expensive home theater PC setup. But it has a few drawbacks. First, there’s no optical disc drive, so you’d need a USB drive. Second, while I haven’t asked the Eee Top to playback HD video yet, I’ve tried playing 1080p videos on other netbooks with Intel Atom processors with disappointing results. Most importantly, you’d probably want a 26 inch or larger screen on a living room computer. And while Asus, MSI, and other companies are coming out with larger Intel Atom-based all-in-one computers soon, my guess is the larger displays will drive up the price significantly. It might be cheaper to buy a 26 or 32 inch HDTV and pick up a cheaper but more powerful nettop like the upcoming Acer AspireRevo which will have an integrated NVIDIA graphics chip.

I’ll be putting the Eee Top through the paces over the next few days and I’ll have a full review with a more in-depth look at the hardware, software, and touchscreen soon. In the meantime you can check out an unboxing video and first look video I shot a few moments after the Eee Top showed up. My demo unit seems to have arrived sans stylus, but there’s clearly a spot for a stylus in the keyboard.