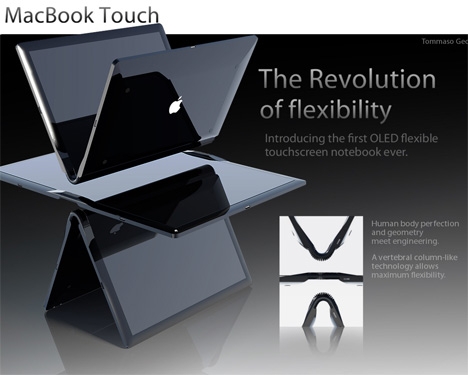 There’s been a lot of talk about a possible Apple netbook, or touchscreen tablet, or something. Apple executives have repeatedly state that the iPhone is currently the company’s entry into the mobile, low cost space and that today’s netbooks are “junky.” But word on the street is that Apple has also placed orders for a large number of touch panels that could be used in some sort of mobile device that would be larger than an iPhone but smaller than a Macbook.

While there’s still no official word on any upcoming Apple tablet or netbook style devices, some designers with a little too much free time on their hands have put together some concept art showing what a Mac tablet could, or maybe even should look like.

If you believe that Mac is essentially working on a 10 inch version of the iPod touch, perhaps with support for a Bluetooth keyboard, maybe it would look something like this concept from MacFormat’s Adam Benton: 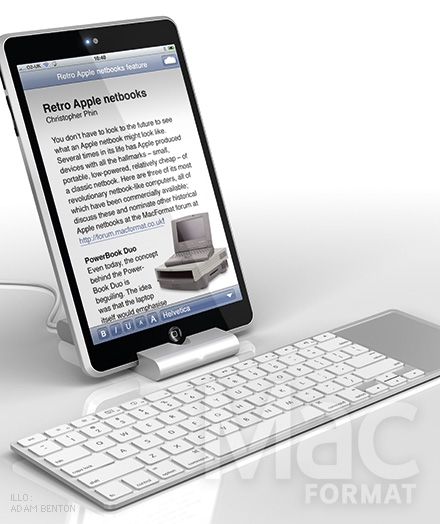 The image at the top of this post is a bit more ambitious and shows a design from Tommaso Gecchelin at Yanko Design. It takes the idea that Apple could use flexible OLED displays and runs with it. For instance, what if you could actually fold a laptop as much as 270 degrees and use it as a tablet, clamshell computer, or even stand it up for use as a picture frame, or for a killer game of Battleship?

You can see a whole bunch of extra pictures of this concept at Yanko Design’s web site.

12 replies on “This isn’t the Apple tablet/netbook, but it sure is pretty”