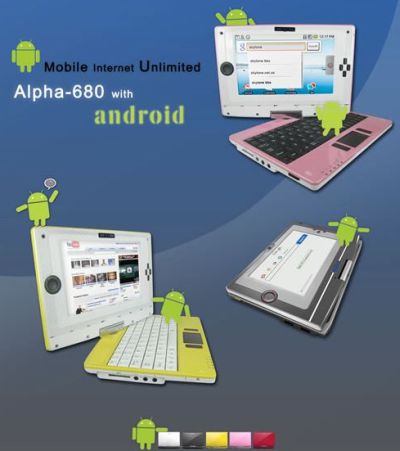 The Skytone Alpha 680 is the first consumer oriented netbook to be powered byt he Google Android operating system. Chinese electronics maker Skytone isn’t exactly a household name. But the company’s been pumping out super-cheap netbooks with Xburst and ARM processors for while. The Alpha 680 actually looks a lot like Skytone’s Alpha 600 series netbook, but it swaps Linux for Android.

The netbook has a 7 inch, 800 x 480 pixel touchscreen display with a swivel, which means you can fold it down over the keyboard for use in tablet mode. And it uses a 533MHz ARM11 CPU. In other words, it’s not going to win any awards for speed, but it should get halfway decent battery life, and it should be plenty powerful enough to run Google Android, which was developed for ARM-based cellphones, after all

Here’s a rundown of the Skytone Alpha 680’s specs:

While the specs may seem kind of underwhelming, word on the street is that this computer could be available for as little as $100. I’m guessing that’s the price for bulk orders and that redistributors will actually sell it for closer to $150, but that price might still be low enough to tempt some people looking for a mobile internet device. It’s worth noting that there are still some rough edges around the Alpha 680 product page. For instance, some of the photos show the machine running a web browser that looks a bit like Firefox running on Windows, even though Firefox doesn’t run on Google Android at all yet.