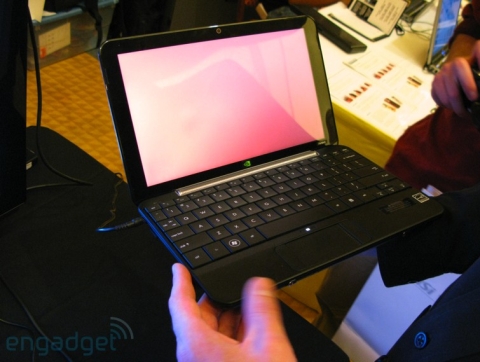 When you go to a trade show like CES or CTIA, there’s a good chance that you’ll see a wide array of computers from companies that are known for making computers. But there’s also something else you’ll find: Computers and platforms hacked together to showcase some third party technology. At a Phoenix booth at CES I saw several Lenovo Ideapad S10 netbooks running Phoenix HyperSpace quick start software, even though Lenovo has opted to go with competitor Splashtop.

And at CTIA, the folks at Engadget discovered that NVIDIA gutted an HP Mini 1000 netbook and replaced its innards in order to show off NVIDIA’s Tegra platform. NVIDIA ripped out the Intel Atom chipset and loaded the HP Mini with NVIDIA’s mobile chipset with a low power graphics processor capable of playing HD video and handling 3D graphics on mobile devices. Tegra can’t handle Windows XP, Vista, or Windows 7, so the prototype is running Windows CE. Theoretically, Linux would also be an option.

You’ll probably never see an HP Mini looking like this and sporting a Tegra chipset come to market. Rather, NVIDIA was just using some existing hardware to showcase its product. But that doesn’t mean we won’t see Tegra-powered devices from HP and other computer makers in the future.

Update: Laptop Magazine also got some hands-on time with this little guy. They report that the Tegra platform should provide 10-15 hours of battery life (although it’s not clear what kind of battery you’ll need to get that performance). The prototype couldn’t handle streaming Hulu videos very well, but NVIDIA is working on improved Flash support. The company is also developign a custom interface for Windows CE with an OS-X style dock.