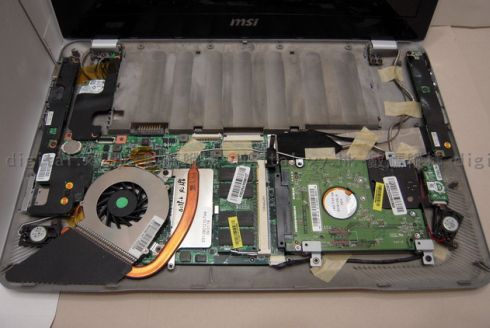 One of the things that’s always surprised me about tiny netbooks is just how much space there is inside even the smallest units to apply hacks and modifications. Want to add a Bluetooth module, GPS receiver, or an extra hard drive? Many mini-laptops have enough space inside the chassis to add these bits without even taking a dremel to the case.

But what about the MSI X-Slim series of not-quite-netbooks? MSI is a company that was primarily known for making computer parts up until a year ago. But the company’s popular Wind series netbooks have given MSI some street cred in the ultraportable space. The X-Slim series steps things up a bit by packing a faster processor, higher resolution display, and larger hard drive into a super thin and light case. The net effect is a PC that looks a lot like the Macbook Air, but which sells for considerably less.

The folks at UMPC Fever got their hands on an X-340 laptop and took it apart to see what the insides look like. The long and short of it is that there’s a bit of space inside the case, but not much room on the motherboard for adding modifications. The single PCIe slot is used up by the WiFi module. And some components are soldered to the motherboard.

That said, I’m sure the more adventerous hardware hackers out there will figure out a way to tap into the USB lines to cram some extra components inside the case. It’s certainly happened before.

One reply on “MSI X-340 ripped apart, poked, proddedacks and”