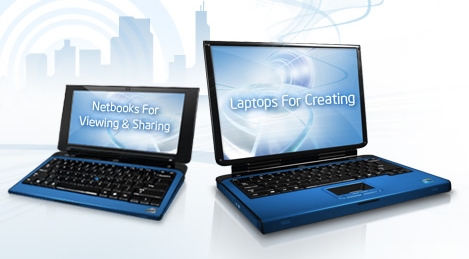 Intel is in a funny position when it comes to netbooks. The company’s low power Atom processors have proven hugely popular. They show up in mini-laptops from Dell, HP, Acer, Asus, MSI, Lenovo, Toshiba, Sony and other major computer makers. And netbooks and Intel Atom processors represent growth areas for computer companies at a time when the global recession is generally taking a heavy toll on tech industry sales.

But netbooks and Atom CPUs are cheap. And the profit margins are low. So while companies are selling a lot of these devices, they aren’t making a ton of money — or at least not as much money as they would if they were selling pricier, larger notebooks with more powerful processors.

So what’s the solution? Convince consumers that they really need two separate devices, a notebook and a netbook.

Intel has posted an information page explaining the differences between netbooks and more traditional laptops with helpful answers to questions like “Can I replace my aging laptop with a netbook? No. A netbook doesn’t have the processing power and functionality you’d need to run many fo the applications your current laptop supports…”

Except that’s not entirely true. Intel created a chart that suggests Netbooks can’t multitask, create and edit videos and photos, encode music, watch HD movies, or run complex office software. The truth is most netbooks can do all of those things with the exception of watching 1080p videos (although most Atom-powered netbooks have no problem with 720p videos). They just can’t do them as well as a pricier computer with a faster processor, more RAM, etc. But I’ve had no problem editing images while listening to music and surfing the web on a netbook.

I still wouldn’t really suggest that most consumers purchase a netbook as their only computer. The screen and keyboard are relatively small and some people will get frustrated if they try to use these tiny laptops for more than a few hours at a time. They’re much slower than computers with dual core processors at performing tasks like editing videos. And some web pages and computer programs will have problems fitting on a 1024 x 600 pixel display.

But for some people, a netbook would certainly be a decent replacement for an aging laptop — especially if you also happen to have a desktop computer at home. Where netbooks really excel is in their portability. They’re so much smaller and lighter than the laptops of yesteryear that you’ll be much more likely to actually take a computer with you when you leave the house if you own a netbook. Since I started using netbooks in 2007 my 15 inch laptop has found a permanent space on my desk. It rarely leaves the home office, let alone the home.

Still, I can understand why Intel wants to convince people that netbooks aren’t really laptops. They’re in the business of selling processors, after all.