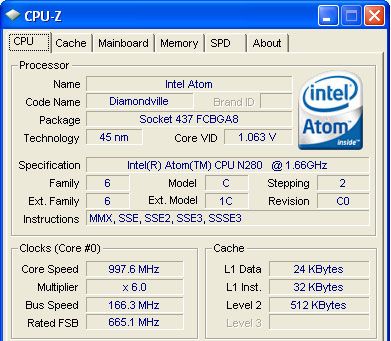 The Intel Atom N280 CPU is showing up in more and more netbooks. The Asus Eee PC 1000HE, Acer Aspire One D150, and upcoming MSI Wind U123 all use the latest generation version of the Intel Atom CPU. It’s a little bit faster than the N270 that has been on the market for about a year. The N280 runs at 1.66GHz while the N270 runs at 1.6GHz. And the newer chip has a front side bus speed of 667MHz compared with 533MHz on the older model. But what exactly does that mean?

I’ve already shown that you can easily overclock the Intel Atom N280 processor to run at 1.75GHz on Asus computers. If you use third party overclocking software you could probably go much further. But the folks at ComputerMonger decided to pit the Intel Atom N270 and N280 processors running at their stock speeds against one another. The results? Yeah, there’s not a huge difference between these chips. But there is a little difference.

To make as close to an oranges to oranges comparison as possible, ComputerMonger used an Acer aspire One D150 with an N280 CPU and Acer Aspire One A150 with an N270 chip. The D150 scored a few points higher in a series of benchmarks. But the differences were pretty slim. The long and short of it is that you shouldn’t expect miracles from the Intel Atom N280 processor, or even a noticeable performance boost over the Intel Atom N270. We’ll probably have to wait for next generation chips or the NVIDIA ION platform which bundles the Atom CPU with an NVIDIA GPU for that.