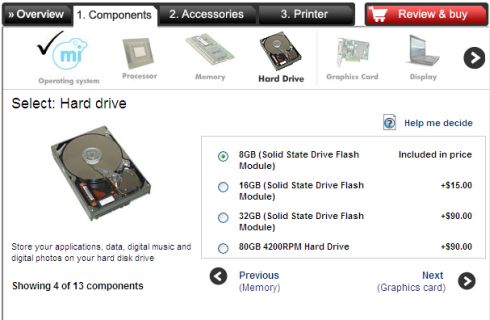 When HP launched the Mini 1000 netbook late last year, the company insisted on using a 1.8 inch hard drive instead of one of the 2.5 inch HDD’s more commonly found in laptops. This helps the netbook, which measure just an inch thick, keep its slim profile. But it also meant that the hard drive’s topped out at 60GB and 4200RPM.

Now it looks like HP has found a deal on cheap 80GB 1.8 inch drives, because when you go to configure your order the 60GB option has been replaced with an 80GB drive. Unfortunately it’s just as slow, at 4200RPM. There’s also a new 32GB option for customers who want a solid state disk, but were dissatisfied with the 16GB that was available before.

That means of you’re configuring an HP Mini 1000 with Windows XP you can now choose between a 16GB or 32GB SSD or an 80GB hard drive. If you’re choosing the HP Mini 1000 Mi Edition which runs a custom version of Ubuntu Linux, you can also opt for a smaller 8GB solid state disk.