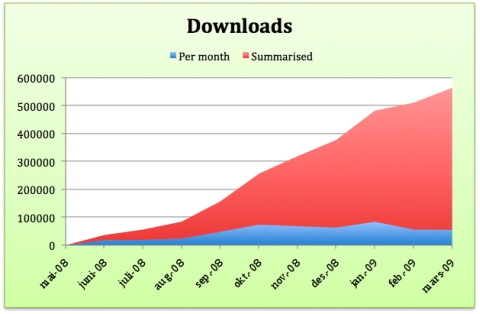 You know netbooks are popular when big companies like HP, Dell, Acer, Asus, MSI, and Samsung are selling millions of them. You know netbooks are popular with hackers and tinkerers when third party applications and even operating systems designed for them are downloaded in droves. This week Easy Peasy developer Jon Ramvi announced that his custom version of Ubuntu Linux has been downloaded half a million times since launching less than a year ago.

And Easy Peasy is just one netbook-specific Linux distribution. There’s also Eeebuntu, another Ubuntu derivative, and dozens of other open source operating systems (only some of which are based on Ubuntu) either designed for netbooks or tweaked to work well with these diminutive computers.

Of course, now that Ubuntu 9.04 includes enhanced support for netbooks, third party distributions like Easy Peasy and Eebuntu might not be as necessary. But  I’m sure Ramvi and others will continue to think of new ideas to make these distros useful.