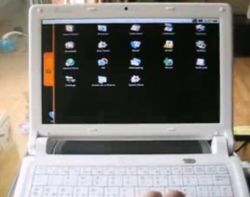 Skytone may be the first company to offer netbooks preloaded with the Google Android operating system. But hackers have been porting Android to run on netbooks for months. We’ve already seen it running on an Asus Eee PC 1000H and an HP 2133 Mini-Note. And now we can add another netbook to that list, the Pantum iBuddie from Korea.

That’s about all I know. It’s not entirely clear whether Lim hacked an iBuddie or if he’s part of some project to bring the operating system to future netbooks like the iBuddie. It looks like this particular netbook is actually set up to boot several operating systems. It’s a bit hard to read the GRUB menu in the blurry video, but I’d say it’s triple booting Fedora Linux, Ubuntu Linux, and Google Android.

You can find the video of the Google Android powered iBuddie after the break.