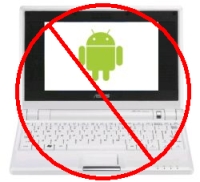 Asus released its first quarter financial results yesterday, and dropped a few hints about its future netbook products in the process. First, the company posted a profit in the first quarter, which surprised analysts, but net profit is down a whopping 94% from the same period last year. And the company recorded a large operating loss for hte company.

Asus CEO Jerry Shen says he expects things to turn around during the second half of 2009 as Asus begins bringing new products to market. But two things that we won’t be seeing from Asus this year are netbooks using ARM processors or the Google Android operating system. While Asus has reportedly looked at the possibility of developing an Android-powered netbook, Shen says that Asus is sticking with Windows for now because it’s what “most consumers are used to.” I don’t think this means that Asus will be abandoning Xandros Linux altogether, but while the first Eee PC netbooks shipped exclusively with Linux, most Asus netbooks today ship with Windows. Of course, you can always replace it with another operating system like Ubuntu or OS X if you know what you’re doing.

Shen also says that Asus has no plans to begin using ARM based processors, and will instead stick with x86 processors. That makes a lot of sense in light of Shen’s comments regarding Windows, since Windows can’t run on ARM CPUs.

6 replies on “Asus posts profit, has no plans for ARM, Android netbooks this year”