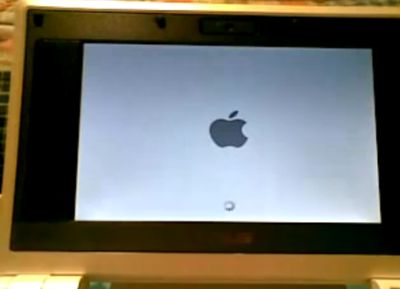 From the “because we can” files, a Youtube user has uploaded a video showing Mac OS X running on an Asus Eee PC 701. The 701 was the first generation of Eee PC netbooks from Asus. The computers feature 7 inch, 800 x 480 pixel displays, 900MHz Intel Celeron processors, as little as 512MB of RAM, and solid state disks ranging from 2GB to 16GB.

In order to get OS X running, this user upgraded the RAM to 2GB, but there’s not much you can do about the screen resolution or processor. And you know what? OS X still seems to run reasonably well. To see for yourself, check out the video after the break.

This makes it clear that Apple will need to walk a fine line if and when the company releases a netbook-sized device. On the one hand, it’s entirely possible to run a full version of OS X on hardware that costs less than $200. On the other hand, Apple isn’t going to want to cannibalize the sales of more expensive Macbook laptops, so I suspect the company will try to bring out a device that offers users some of the functionality you would expect from a laptop or portable internet device, but which doesn’t run a full version of OS X.