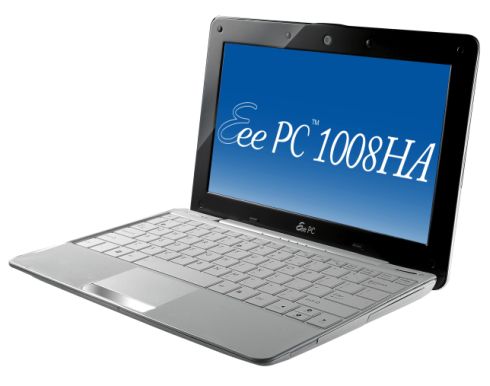 Asus may have unveiled the Eee PC 1008A Shell netbook at CeBIT in March, but according to DigiTimes, the mini-laptop will be making the rounds again at Computex in Taiwan in June. In other words, it doesn’t sound like this netbook will be widely available before June, despite the fact that we’ve already spotted it on the FCC web site in the US.

The Eee PC 1008HA will be the thinnest and lightest 10 inch netbook in the Asus Eee PC lineup. Word on the street is it will run around £359 in the UK, which is the equivalent of about $523 US.

DigiTimes also says that Asus will be showing off three new ultra-thin notebooks at Computex, the UX, U, and Edge series laptops. These aren’t part of the Eee PC netbook line, as they’re described as high end, mid-range and entry level computers.

You can read more about the Eee PC 1008HA in the Liliputing Product Database.