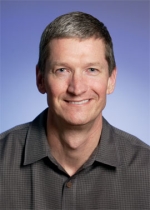 Apple just released its quarterly earnings results. And despite the economy having been in the toilet for much of the quarter, Apple reported record profits of $1.21 billion. So it probably shouldn’t come as any surprise that Apple still isn’t interested in putting out one of those newfangled dirt cheap netbooks all the kids are talking about. Because despite countless pundits who claim that Apple will have to start pumping out lower costs machines if it wants to keep making money during a recession, the company is making money during a recession by selling premium products to customers who are willing to pay for them.

During the earnings call, Apple Chief Operating Officer Tim Cook took yet another chance to let the world know that Apple is not developing a netbook. At least not one that looks anything like the netbooks flooding the market today.

Engadget quotes Cook saying that netbooks today have “cramped keyboards, junky hardware, very small screen, bad software” and says these aren’t the type of products that Apple would “put the Mac brand on.” He says Apple’s not interested in thee netbooks and that he doesn’t think they’re “something consumers would be interested in the long term.”

In other words, Cook says netbooks are just a passing fad and while he doesn’t rule out the possibility of Apple bringing a new “innovative product” to market, he basically implies that you can use an iPhone or iPod Touch to do everything you can do with a netbook.

You know what? I’m not even going to bother with a counterpoint here. I’ll leave that to you. Comment away!