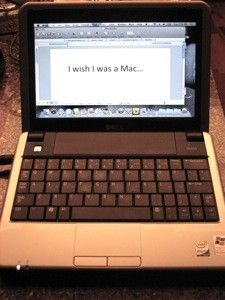 Apple has consistently denied each and every rumor that the company is making a netbook, while dropping hints that we could see something new in the ultraportable (and hopefully low cost) space iin the future. Most recently, Apple COO called netbooks “junky” and maligned the software and hardware of today’s models.

On the service, it looks like Cook and company are ignoring two very important facts. First, netbooks are selling like hotcakes and there are millions of people out there who seem to be happy enough to pay $400 or so for a junky computer if it’s light weight, super portable, and does at least some of the things they need a computer to do. Second, people have been installing hacked versions of OS X on these netbooks almost since day one, so there’s not only a huge demand for Apple netbooks, there are probably thousands of people already using homemade Macbook Minis.

But TUAW’s Steven Sande isn’t one of them. Not anymore. After trying to use OS X on a Dell Inspiron Mini 9 computer for a few months he gave up. A few of his complaints were hardware oriented. For instance, he hates the computer’s small keyboard and unusual key placement. But that shouldn’t be an issue for users with larger netbooks that have larger keyboards.

But a number of his other complaints are really about OS X running on a netbook — not about netbooks themselves. For instance, he complained that the 1024 x 600 pixel display wasn’t large enough to handle many Mac programs. There are two ways to fix that: Have a device with a higher resolution display or encourage OS X developers to write applications that will scale to smaller screens. My guess is that if and when Apple does release something in this space, they’ll go with the first option.

Sande also complained that the 16GB solid state disk that came with the Dell Mini wasn’t enough for the operating system, software, updates, and files. He constantly found himself running out of space. You could complain about the small space, or a bloated operating system. But what it really comes down to is the fact that Apple never intended for you to run OS X on a Dell Mini 9, and neither did Dell. The hardware and software are capable of working surprisingly well together. But it shouldn’t come as a surprise that the user experience isn’t as good as it could be.

So is the moral of this story that Apple shouldn’t develop a netbook? Not at all.

But given the system requirements of OS X today, it doesn’t make sense for Apple to release a netbook with a 1024 x 600 pixel display, 16GB or less of storage space, or 1GB or less of RAM. Apple keeps dropping hints that it will only release a new product in this space if it can develop something truly innovative. But honestly, it sounds to me like a 10 to 12 inch 1366 x 768 pixel display, an Intel Atom processor (preferably with discrete graphics), 2GB or RAM, and a decent sized hard drive would be enough to make many OS X fans happy. And it’s something Apple could totally build with off the shelf parts and sell for $600 or less.

But I doubt they will. Because that would look too much like a low end Macbook or a Macbook Air, and it could cannibalize sales of higher priced Apple products.

17 replies on “Another view: Maybe Apple shouldn’t make a netbook”