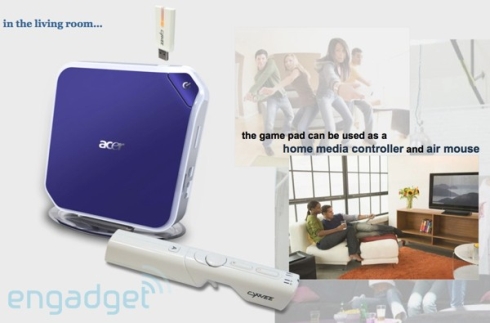 Rumor has it that Acer plans to launch a new low power nettop on April 8th that bears a more-than-striking resemblance to a gaming console from a company that rhymes with wintendo. The Acer Hornet will reportedly be be built around the NVIDIA Ion platform, which means it will have a low power 1.6GHz Intel Atom N230processor paired with an NVIDIA graphics processor that should provide enough power to handle 1080p video playback. It should also prove capable of handling some modern video games that would normally run like crap on most Intel Atom processors using integrated Intel GMA950 graphics.

What’s more, Engadget reports that the Hornet will come with a Wiimote-like remote control that you can use to play games or navigate on-screen menus. In other words, the Hornet is just begging to be placed next to the HDTV in your living room.

The computer will have an 80GB hard drive, 1GB of RAM, and Vista Home Basic. While Windows Vista isn’t known for running well on slower machines, you can also pick up a pricier model with 2GB of RAM, a 160GB hard rive, and Windows Vista Home Premium which includes media center features for interacting with music, movies, photos, and online video from the comfort of your couch. If Engadget’s sources are correct, this nettop could sell for under $299.