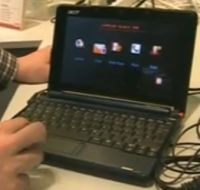 Over the past few months we’ve seen a lot of action in the “quick boot” operating system space. DeviceVM’s SplashTop and Phoenix’s HyperSpace have been leading the pack, at least in terms of publicity. But now there’s a new player: Linpus Linux Lite.

Linpus makes the Linux operating system currently used on non-Windows versions of the Acer Aspire One netbook. It’s a simple Linux distribution designed for people who aren’t necessarily familiar with Linux. And while it boots and launches programs at a pretty decent pace, it looks downright sluggish compared to the new Linpus Quick Boot software that Sascha from Netbook News.de got a chance to check out at CeBIT.

While Sascha suggests that the Quick Boot software is installed on the hard drive and not the BIOS, a Linpus press release seems to imply that the software is actually running from the BIOS. That makes it easy to boot into a usable operating system in as little as 6 seconds. But you probably won’t be able to access your computer’s other programs and settings while in Quick Boot mode. Instead you’ll have to restart your system and wait 30 to 60 seconds for a full operating system to load.

I’m not aware of any announcements from computer makers indicating that they’ll be using the Linpus Quick Boot software. But given the company’s existing relationship with Acer, I wouldn’t be surprised to see the feature pop up on future Aspire One models.

You can check out Sascha’s demo video after the break.