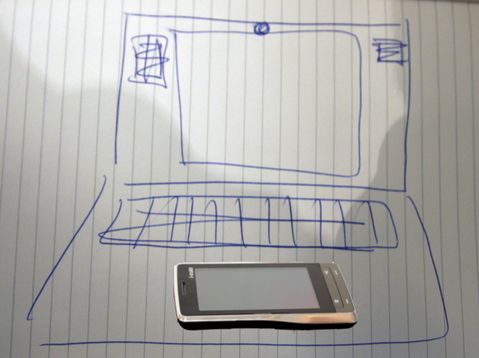 I keep hearing that the lines between cellphones and laptops are blurring. While it may be true that cellphones are getting better and better as web browsing and productivity devices, sometimes you need a larger screen or keyboard to get work done. At the same time, it would be nice to have a single device you could carry around with all of your important information on it.

Enter the i-mate Warrior concept design. The idea is that the company’s smartphone would function as a standalone device — or you could insert it into a laptop shell when you need a larger display or a full sized keyboard. The touchscreen phone would function as a trackpad and would power the full computer. The unreleased phone will have an 800MHz CPU, WiFi, HSDPA, GPS, and Bluetooth support, a MicroSD card for expansion, and it will run Windows Mobile 6.5. The phone could cost as little as $200, although I’m guessing you’d have to pay extra for the laptop shell.

This isn’t the first time we’ve seen this idea. A while back, there was an OLO Computer concept design that would have turned an iPod into the guts of a similar laptop/phone hybrid. Celio has also been pushing its RedFly product for the last year or so without much success. For $199, the RedFly basically acts as a large display and keyboard for your Windows Mobile powered phone – but it connects wirelessly to the phone, rather than using it as a touchpad.