The HP Mini 2140 is a business class netbook. Unlike most netbooks on the market, the Mini 2140 has a solid aluminum and magnesium alloy chassis. It also has a spill-resistant keyboard, an ExpressCard slot and an accelerometer that detects when the computer is in freefall and shuts off the hard drive to prevent damage. For these reasons, the netbook has a higher starting price than its siblings like the HP Mini 1000. But for some business or casual computer users, those features could justify the price.

The HP Mini 2140 looks almost exactly like the HP 2133 Mini-Note, HP’s first foray into the netbook market. Both computers feature the same professional-looking aluminum and magnesium-alloy finish. Both have large keyboards with nearly full sized keys, and small touchpads with buttons on the left and right instead of underneath. The biggest difference is that the HP Mini 2140 has a larger 10.1 inch display, while the 2133 had an 8.9 inch high resolution 1280 x 768 pixel screen. The newer model also has an Intel Atom processor, while the HP 2133 Mini-Note was bogged down by a sluggish VIA C7-M CPU. 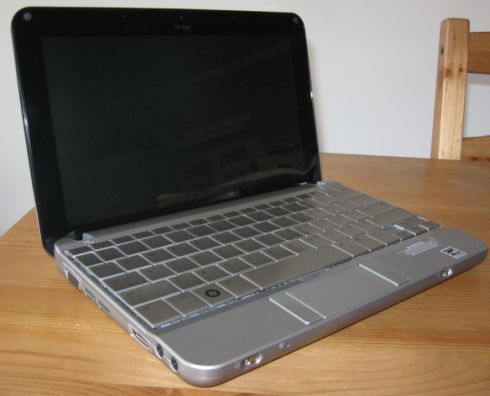 The similarities with HP’s first netbook are good things. The HP Mini 2140 is one of the most attractive netbooks around. While many mini-laptops are encased in cheap plastic that give the machines the look and feel of toys, the 2140 looks like a real computer. Just smaller. It’s not quite as thin and light as the HP Mini 1000, which is HP’s current consumer oriented model. But the extra few millimeters means that HP was able to squeeze in a full sized VGA port, ExpressCard/54 slot, and a larger hard drive.

The computer’s two hinges are made of a metal alloy with steel pin axles. HP says the hingest have been tested in an environment that simulates opening and closing the netbook 10 times a day for 6 years.

HP offers a SSD option for the HP Mini 2140. But it’s an 80GB hard drive that costs $575, as of March, 2009. That’s because this is a high speed, high quality solid state disk, not the cheap flash memory that you’ll find in lower priced netbooks. An HP rep I spoke with said the main advantage HP sees in using cheap flash memory like that found in the HP Mini 1000 is that it provides some safety against drops and bumps. But HP feels that its DriveGuard technology which turns off the hard drive in the event of a bump or fall provides a similar service. So the company only offers a high end SSD option for the HP Mini 2140.

While most netbooks have 3 USB ports, the HP Mini 2140 has just 2. The ExpressCard Slot takes up a fair amount of space, and doesn’t leave much room around the edges for a third USB port, so if you plug in a mouse and a flash drive, you’ll have to rely on that ExpressCard slot for a 3G modem or other accessories.

The HP 2133 Mini-Note was one of the hottest netbooks around – literally. It got significantly hotter than most similar netbooks when used for an extended period. I often found that it would get uncomfortably hot if resting on my lap. The HP Mini 2140 does not have this problem. I don’t know if it’s due to the switch to the Intel Atom processor or better ventilation. Either way, I’m happy to see that the heat problem has been addressed.

As with the HP 2133 Mini-Note and the HP Mini 1000, HP has built some of the status LEDs into the power and WiFi buttons. The only standalone status light is the hard drive activity indicator.

This computer has one of the best looking keyboards of any 10 inch netbook. The keyboard stretches virtually from one end of the chassis to the other, giving the impression that HP couldn’t have fit a larger keyboard if it had tried. The shift keys on the right and left side of the keyboard are both full sized. There are two Alt buttons, but only a single Fn key. 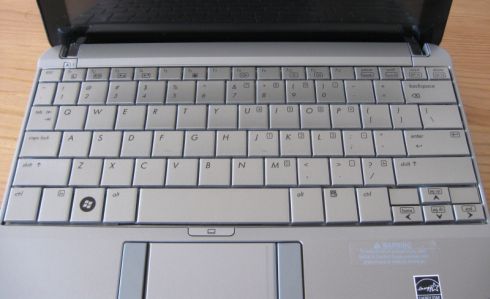 The keys are flat, so if you prefer concave keys this keyboard might not be as comfortable. And there is very little space between the keys. I personally find I’m more comfortable typing on a keyboard with more space between the keys, which makes it easier to pick out the correct keys by touch. But it only took a few moments to get used to the HP Mini 2140 keyboard, especially after having used the HP 2133 Mini-Note and HP Mini 1000, which both have very similar keyboard designs.

HP also describes the keyboard as “spill-resistant,” against minor spills, although I decided not to put this particular claim to the test. The keys also use HP’s DuraKeys clear coating to help protect the finish and prevent the printed characters from wearing out.

The touchpad is long but narrow. While it doesn’t support multitouch gestures, there is a thin strip along the right side that can be used to scroll through pages in a web browser or other applications. The left and right mouse buttons are on the left and right side of the touchpad instead of below it, which makes one-handed operation tricky. But this design helps accommodate the large keyboard without adding significantly to the size of the netbook. 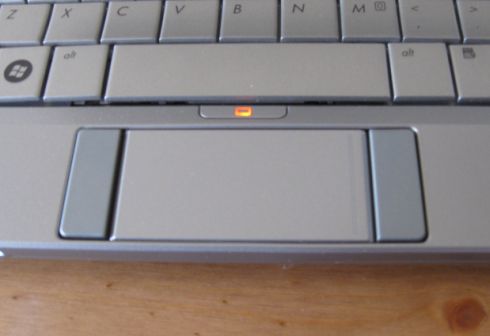 The HP Mini 2140 has a bright, glossy display. While HP plans to offer a high resolution 1366 x 768 pixel, 10.1 inch display soon, this unit had a 10.1 inch, 1024 x 576 pixel screen. On the one hand, this provides a 16:9 aspect ratio which means that you can watch many widescreen videos without any black spaces above and below the video. On the other hand, that’s nearly 25,000 fewer pixels than you find on netbooks with a 1024 x 600 display. And since most people will probably use their netbooks to surf the web more than to watch widescreen videos, I’d rather have the extra pixels. 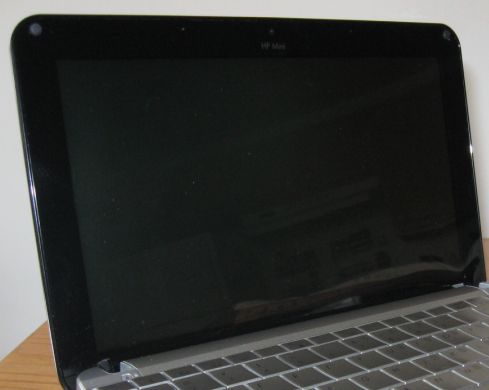 In practical terms, you lose about 2 lines of text when reading most web pages. HP isn’t the only company offering a 1024 x 576 pixel display. The prices on these screens are a bit lower than on the 1024 x 600 pixel models at the moment, which is leading to this rather unfortunate trend. Fortunately, HP is one of the few companies with plans to offer customers an opportunity to select a higher resolution display.

The glossy screen is attractive, but it reflects glare when in direct sunlight. I personally prefer matte screens for this reason. But unlike many computers with glossy displays, the HP Mini 2140 allows you to adjust the screen brightness to an almost ridiculously bright level which makes the screen a bit easier to read outdoors.

The screen area is also the only fingerprint magnet on the laptop. There’s a black bezel around the edge of the display that fills up with fingerprints just as quickly as the glossy lids on netbooks like the Asus Eee PC 1000HE and HP Mini 1000.

This netbook comes with a choice of a 3 cell, 28WHr battery or a 6 cell, 55WHr battery which HP says provides a little more than twice the run time. I ran the Battery Eater test twice. The first time, I had the brightness set to 100% and the WiFi on, and the battery lasted for 2 hours and 12 minutes. But then I realized that I almost never use this computer with the brightness at 100%, so I adjusted it to around 70% and ran the test again. This time the battery died after 2 hours and 22 minutes. That’s about 26 minutes better than the HP Mini 1000. 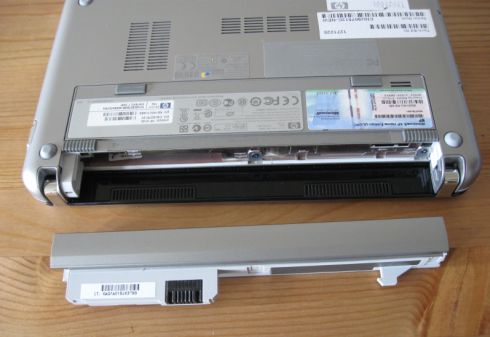 The Battery Eater test is designed to put strain on the CPU continuously. So under real world conditions, I would expect to get 3 hours or more of web surfing and document editing time. Watching videos will probably wear the battery down a bit faster. The 4 hour estimate that HP provides might be pushing it a little, but 3.5 hours seems reasonable. 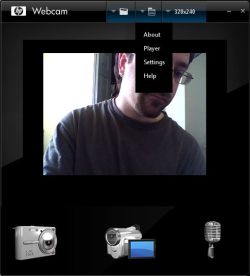 The HP Mini 2140 ships with a copy of McAfee Total Protection and a 60 day trial of Microsoft Office. If you’d rather bring your own antivirus and office apps, there’s no reason you couldn’t run AVG Free and OpenOffice.org or other free apps.

There’s a quick launch utility that allows you to access system features like the volume control, external display, and power options with just a few clicks. There’s also a Desktop Zoom feature that makes it easy to adjust font and icon sizes, as well as title and menu fonts. This feature will likely be more useful when the high resolution 1366 x 768 pixel display is available.

HP’s webcam software offers the ability to take snapshots, record videos, or record audio only tracks. The software provides far more control than the webcam software most manufacturers ship with low cost netbooks. You can easily adjust the screen resolution, zoom level, backlight compensation, and output format (although your options are  pretty much limited to Windows Media, BMP, and JPG, and uncompressed AVI video).

HP’s DriveGuard software interacts with the built in accelerometer to shut down the hard drive in the event of the fall to prevent data loss. You can disable this feature if you feel the software is affecting your computer’s performance. But I’d highly advised against disabling this safety feature.

Like most netbooks with a 1.6GHz Intel Atom N270 CPU, the HP Mini 2140 offers decent performance for non CPU-intensive tasks. I had no problem surfing the web and blogging using Firefox, Google Chrome, or Internet Explorer with several tabs open simultaneously. It can handle web video from YouTube and Hulu with no problems, but chokes up on high definition internet video.

The computer boots Windows XP in about 45 seconds, which is pretty much par for the course among today’s Atom-powered netbooks. But it takes a disappointing 32 seconds to shut down the computer.

The speakers are loud and clear, although no replacement for a good set of external speakers. I tested the microphone with Skype and it recorded my voice very well from about 18 inches away.

The HP Mini 2140 certainly isn’t the cheapest netbook around. But you get what you pay for.

Sure, the processor isn’t any faster than the CPUs in lower priced netbooks like the HP Mini 1000. And it’s not the thinnest and lightest mini-laptop available. But for a reasonable amount of extra cash you get a sturdier case, an accelerometer, a spill resistant keyboard with DuraKey finish, an ExpressCard slot, and a decent if not spectacular 3 cell battery. A 6 cell battery is also available, which reportedly runs for up to 8 hours with a standard hard drive, and up to 10 hours if you opt for the $575 80GB SSD.

If you don’t need these extra features, you can save some money and buy a cheaper netbook. But with a starting price of $449, the HP Mini 2140 doesn’t cost that much more than some of the competing machines from Dell, Samsung, Asus, Lenovo, MSI, Acer, and others. So while this netbook is designed for and marketed at enterprise customers, I can see it doing quite well at retail as well. And when HP starts making the higher resolution, 1366 x 768 pixel display available in April, it will be one of the first companies to offer a sub-$500 netbook with an HD screen, which could make this device stand out from the crowd even more.