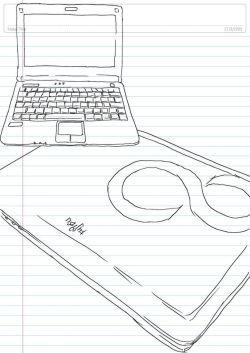 Fujitsu is reportedly working on a new netbook to follow up last year’s Fujitsu Siemens Amilo Mini. A member fo the UMPC Fever forums posted a concept drawing of a laptop he says is the new Fujitsu M2010.

There’s virtually no additional information about this model, other than the fact that it’s due otu in July.

But based on the drawing, it looks like Fujitsu has decided to adjust the touchpad by moving the mouse buttons below the touch area. The original Amilo Mini included buttons to the left and right, much like those found on the HP Mini series of netbooks. I’d venture a guess this means the new Fujitu netbook will also have a 10 inch display and a larger keyboard than the current generation, since that would also mean more space in the palm rest area to accomodate those buttons.

The Amilo Mini never made it to the US, but is available in parts of Europe. No word on whether the M2010 will show up in the states… or anywhere for that matter. After all, this is just a drawing.