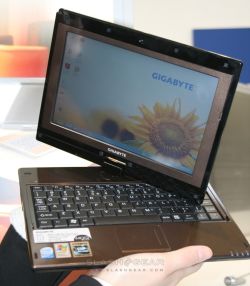 We’re starting to see netbook makers pack touchscreens into netbooks like the Asus Eee PC T91, Gigabyte Touch Note, and Intel Classmate PC 3. For the most part these mini-laptops use resistive touch screens, which are cheaper and less clear than pricier capacitive touchscreen displays. And that makes sense, since netbooks are low price computers. But if you want a display that’s capable of recognizing multi-touch gestures (like pinching your fingers together), you’re going to want one of those capacitative doohickeys. And since Windows 7 is supposed to offer advanced support for multitouch, you probably do want a display that can handle it.

Now it looks like Taiwanese touch panel controller company EETI is expected to start shipping 7 and 12 inch capacitive panels for use in notebooks later this year. I’d be more convinced that these panels were destined for netbooks if there were 9 and 10 inch displays in there too. It seems like most of the companies producing 7 inch mini-laptops are phasing out those models to focus on larger screens. And while some computer makers are starting to position 12 inch laptops as netbooks, to me they just look like relatively small computers that are still too big and heavy to throw in your bag every time you leave the house.

But if EETI can produce 7 and 12 inch panels at reasonable prices, there’s no reason we couldn’t start to see capacitive displays showing up in high end netbooks by the end of the year.

2 replies on “Capacitative, multitouch screens coming soon to a netbook near you?”