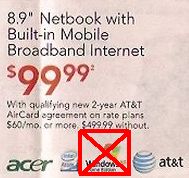 Word on the street is that AT&T will begin offering customers a $99 netbook with a 3G modem (and probably a 2 year service plan) this summer. It’ll be the first netbook offered by the company that doesn’t run Windows. AT&T had previously partnered with Radio Shack to sell 3G netbooks from Acer and Dell.

There’s no word on who will manufacturer these mystery netbooks or what operating system they’ll run, although I’m assuming some flavor of Linux or possibly Google Android.

In mostly related news, the cellphone blogosphere is abuzz with the news that Michael Dell dropped a few hints that the company is working on several 3G devices with “smaller screens” than the company’s netbooks. It’s been a few years since Dell killed off its popular Axim PDA lineup. While conventional wisdom points to Dell developing a new Smartphone running Windows Mobile or Google Android, it’s possible that the company could be working on some sort of small screen Mobile Internet Device as well.