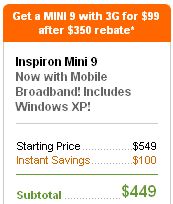 AT&T customers can already pick up cheap netbooks from Acer and Dell when they sign up for a long term service plan. And Verizon offers a $100 rebate to customers who purchase an HP Mini 1000 with a 3G modem and sign up for a 2 year plan. But we’re not quite at the point where wireless providers subsidize netbooks the way they do with most cellphones. But if things keep going the way they have been, that could change.

And according to Investor’s Business Daily, there’s reason to believe that the trend will continue. AT&T is reportedly talking to additional computer makers about offering deals similar to the ones it has for the Acer Aspire One and Dell Inspiron Mini 9. While the telecom obviously loses a bit of money up front by footing most of the bill for the computer, AT&T charges $60/month for wireless broadband service. Over the course of two years, that’s a lot of money. And there’s a decent chance you won’t just decide to cancel your AT&T account once your contract is up.

As previously reported, AT&T will also soon begin selling netbooks in its retail stores. I wouldn’t be surprised to see Verizon, T-Mobile, and other companies follow suit in the next year or so.