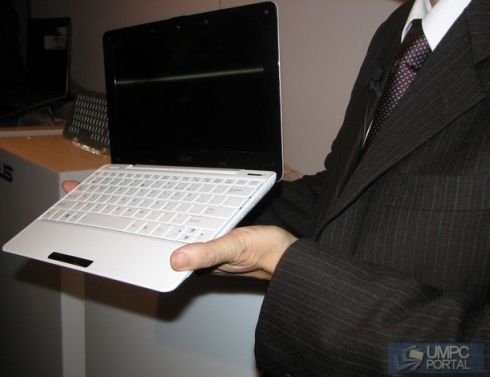 The mini-laptop, formerly known as the Eee PC Shell almost looks more like an MSI netbook than an Asus product. Like MSI’s Wind series, the lid on the Eee PC 1000HA slips down behind the case of the computer when you open it up, giving the computer a slightly smaller profile.

The new Asus netbook is about as thin and light as the high end Eee PC S101, but word on the street is that it will carry a lower price tag. Chippy from UMPC Portal snapped a set of photos of the Eee PC 1008HA, and it looks like it has a nice large keyboard and touchpad. It also appears to have an unusually large (for an Asus netbook) shift key on the right side of the keyboard which should make touch typists happy.

SlashGear reports the computer will also use the new Asus Eee Docking application bar, which lets you access an Eee Sharing utility to transfer files between Eee PC netbooks and an Eee Areana online media and gaming portal with a single click.

Update: ZDNet reports that Asus unveiled another surprise at its CeBIT news conference. Eee PC doesn’t stand for “Easy to learn, Easy to work, Easy to play” anymore. It now stands for “Easy Excellent, and Exciting.”

Update 2: Eee-PC.de has some more hands-on photos, including some great shots of the new keyboard.

Update 3: And Asus has sent along some high quality photos of the netbook. Official word is that the company is “launching” this product today, not releasing it. That means there’s no information available about the final specs (like the CPU and chipset), price, or release date. But you can find the new images after the break.

Yet another update: Engadget has posted some excellent hands-on photos that show off the keyboard, screen, and other design elements.