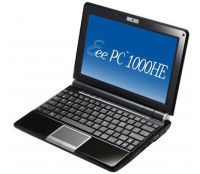 The Eee PC 1000HE is the next generation of the popular Asus Eee PC 1000H. At first glance, the two computers are almost identical. They have the same chassis, display, hard drive, and RAM. But there are a few minor changes that make the Eee PC 1000HE worth checking out. First, it has a marginally faster 1.66GHz Intel Atom N280 CPU (the 1000H had a 1.6GHz Atom N270. But honestly, you’ll barely notice the difference.

The bigger changes are the new “chiclet” style keyboard and a higher capacity battery which provides true all-day computing power. Asus has also lowered the base price. You can pick up an Eee PC 1000HE for between $350 and $400. The Eee PC 1000H launched last summer with a base price of $550, although Asus quickly dropped the price by about $100.

While the Eee PC 1000HE is a definite improvement over its predecessor, both computers do involve some compromises. The Eee PC 1000HE is one of the heaviest and bulkiest netbooks around, weighing in at almost 3.3 pounds. The battery alone weighs nearly 11 ounces. 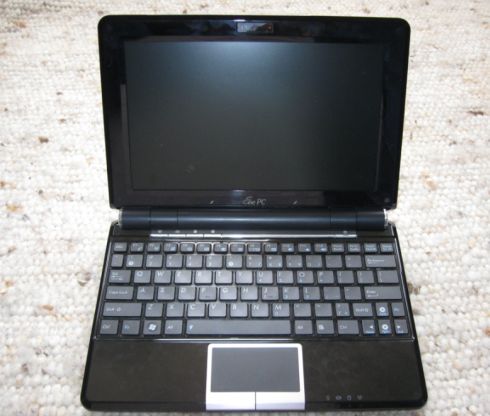 The Asus Eee PC 1000-series netbooks aren’t exactly the thinnest or lightest around. The Eee PC 1000HE measures 10.5″ x 7.5″ x 1.5″ and weighs about 3.26 pounds. It has a 10.2 inch, 1024 x 600 pixel display. But while some netbooks like the MSI Wind U100, HP Mini 1000, and the upcoming Eee PC 1008HA Shell make the screen look smaller by positioning the hinge so that the screen moves down below the chassis a bit when opening, the Eee PC 1000HE lid shoots straight up from the netbook. This makes the netbook look large than almost any other mini-laptop with a 10 inch screen.

The netbook has a plastic case with a glossy lid that shows fingerprints quite clearly. While this might come in handy in tracking down a thief if your netbook is stolen and then recovered, it’s not the most aesthetically pleasing design choice. 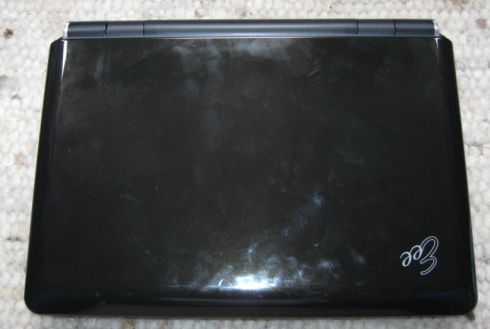 The Eee PC 1000HE has 3 USB ports, a VGA port, and an SD card slot as well as mic and line inputs around the edge of the case. Because the battery fits into the back of the unit, there are no ports on the back. The laptop comes with a high capacity 6 cell battery which adds a bit of bulk to the base of the unit. But the battery generally looks good on the unit, like it’s built for the netbook (because it is), unlike the chunky 6 cell battery for the HP Mini 1000. Because the battery is located at the back of the netbook, the keyboard is tilted slightly when the laptop is placed on a table or other flat surface.

Above the keyboard there’s also a thin strip of chrome with the power button and four user customizable buttons that you can use to launch applications. It’s nice to have these buttons, but you have to press them pretty hard, and it’s easy to think that you hit the power button only to discover a few seconds later when the computer fails to turn on that you didn’t press hard enough.

The Eee PC 1000HE is the first netbook from Asus to utilize the company’s new “chiclet” style keyboard, first unveiled at CES in January. This keyboard has a few advantages over earlier keyboards. First, the shift key on the right side of the keyboard has been moved to the left of the up arrow. Previously touch typists would find themselves hitting the up button when trying to capitalize letters. That shouldn’t be a problem anymore. 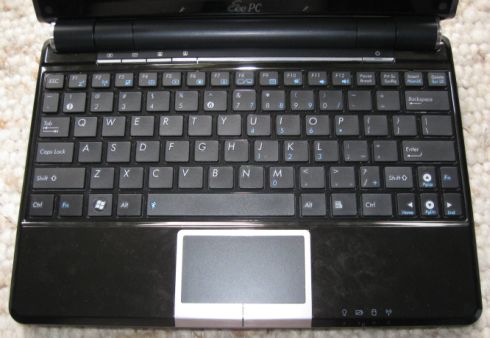 Second, the keys no longer include beveled edges. Instead each key is flat. This increases the amount of surface area, but also leaves a fair amount of space between each key, making it easy to find the right keys with your fingers. The overall typing experience on the Eee PC 1000HE is quite comfortable and at least as good as on the Eee PC 1000H. Asus plans to use this new keyboard design on most of its upcoming netbooks.

The touchpad is identical to the Eee PC 1000H touchpad. And that’s a good thing. It’s wide, has two distinct mouse buttons, and supports multitouch gestures. For example, you can scroll up and down by placing two fingers on the touchpad and moving them up and down. 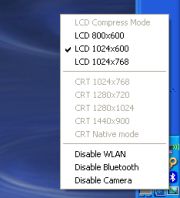 This higher resolution setting can be achieved in one of two ways. Either you can use the compressed setting and squash some pixels to make 1024 x 768 pixel images or web pages fit on your screen (but this looks pretty ugly) or you can use a virtual screen resolution which basically extends the desktop past the edge of your screen. In this mode you navigate by moving your mouse all the way to the bottom of the display to make the taskbar appear, or all the way to the top to see the top few pixels of any window.

You can adjust the screen brightness by hitting the Fn+F5 and Fn+F6 keys. I find the screen is quite readable at around 70%, but quite difficult to read at the lowest settings.

Asus packs the Eee PC 1000HE with its standard raft of software. That includes the Super Hybrid Engine which lets you overclock or underclock the CPU, and the EeePC Tray utility for adjusting your screen resolution.

Users can also sign up for up to 10GB of online storage with the Asus Eee Storage service. This lets you backup important documents to the web, download and install programs.

The computer ships with StarOffice 8, which includes a word processor, spreadsheet application and presentation program. StarOffice is the application suite that OpenOffice.org is based on. You also get a copy of WinDVD, which is strange considering the computer doesn’t have an optical disc drive.

I wouldn’t recommend using any netbook for CPU-intensive tasks like editing videos or running Photoshop. But the Eee PC 1000HE performs reasonably well with common tasks like web browsing, editing office documents, or light multitasking (like running a music player in the background while surfing the web and chatting on an instant messenger in the foreground).

The computer boots Windows XP in about 41 seconds, and takes about 17 seconds to shut down.

This is one of the first laptops to use the new Intel Atom N280 CPU, which has a top clock speed of 1.66GHz. The original Intel Atom N270 CPU topped out at 1.6GHz. As you can guess from those numbers, there’s not a huge difference in performance. But there do appear to be some very minor performance gains.

For instance, while neither the Asus Eee PC 1000H or 1000HE are really up to the task of displaying 1080p HD video, the Eee PC 1000HE with its slightly faster processor appears to drop fewer frames than the 1000H. You can see what I mean in the video below where I attempt to watch a 1080p video from the Microsoft WMV HD showcase on both computers.

The faster processor also means that using the Asus Super Hybrid Engine in Super High Power Mode, you can overclock the computer to run at 1.75GHz. But that will take a toll on battery life. 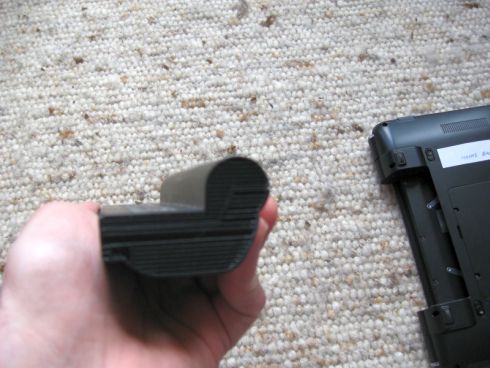 I ran several tests to really put this computer through the paces. Using Battery Eater, the battery lasted for 6 hours and 4 minutes with the CPU set to Power Saving Mode (1.25GHz) and the brightness set at 70%. I ran the test again with the CPU set at Super High Power (1.75GHz) and the screen brightness set t 100%. This time the battery lasted for 4 hours and 51 minutes.

Bear in mind, Battery Eater is designed to put some serious strain on your CPU. In real life, this battery is good for around 7 or more hours. In fact, one day last week I turned it on at about 1:30PM and left it on until 7:30PM without closing the lid or putting it to sleep once. After 6 hours, Windows XP reported that I had about 48 minutes of run time left. Pierre from Blogeee recently ran his own battery of tests, and found that he was able to get over 9 hours out of the Eee PC 1000HE battery.

While the Asus Eee PC 1000HE may be one of the heavier netbooks around, at nearly 3.3 pounds, the fact that you can often leave the power adapter at home certainly helps qualify this laptop as an ultraportable computer. 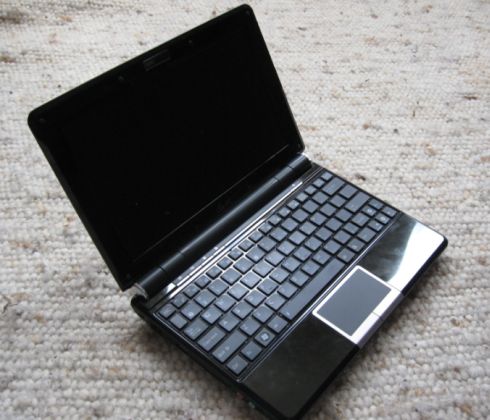 It’s probably not worth trading in your older model for the new version unless you really, really want that new battery. But if you’re in the market for a new mini-laptop, the 1000HE is an excellent choice. And the price is hard to beat. This model usually retails for between $350 and $400.