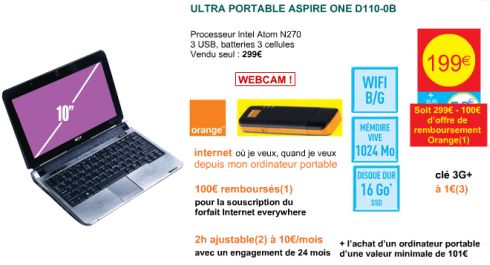 When Acer launched the Aspire One D150 netbok, it was only available with a 160GB hard drive. There was no solid state disk option as there had been on earlier Acer netbook models. But a few weeks after the launch of Acer’s first 10 inch netbok, Netbook 3G has discovered an ad for a new 10 inch model with a 16GB SSD.

French retailer Auchan is selling a netbook described as an Aspire One D110-0B for 299 Euros (with a 100 Euro discount if you sign up for a 3G wireless plan with Orange). You’l have to flip to page 10 of the ad to find the listing.