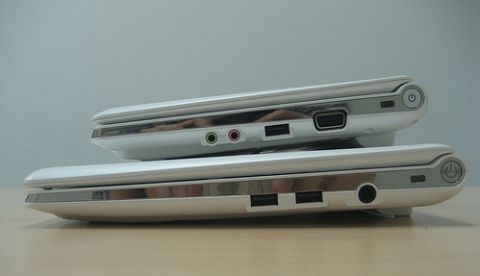 The Samsung NC20 laptop may look a lot like the company’s popular Samsung NC10 netbook. But it’s a lot bigger. I suppose that should be expected when you’re comparing a computer with a 12 inch screen to one with a 10 inch display. But just case you needed any proof, the folks at Netbook News.de have done a little photoshoot comparing the two laptops. They even threw in a Dell Inspiron Mini 12 (with a 12 inch screen) for good measure.

For what it’s worth, the Samsung NC20 looks a little smaller than the Dell laptop. And both machines are probably a lot smaller and lighter than whatever 15.4 inch beast you’ve been lugging around for the last few years. But they’re certainly no netbooks

The thing is, while the Dell laptop offers performance that’s on par with what you’d expect from a low power netbook, the Samsung offers more than just a larger display and keyboard. It also has a VIA Nano CPU which offers a bit more processing power than the Intel Atom CPU used in most netbooks. So while the machine costs more, weighs more, and takes up more space in your bag than a 10 inch model, you also get a bit more bang for your buck.

What do you think? Would you buy a 12 inch laptop for the screen size alone? Or does performance make a difference, even in ultraportables?