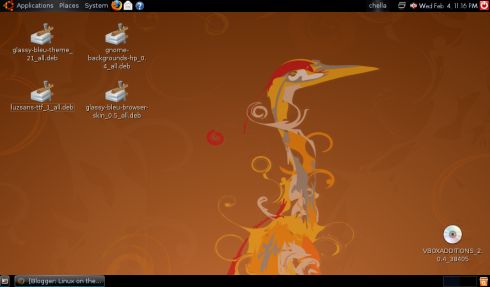 HP’s Mobile Internet Experience software is basically a custom version of Ubuntu Linux that includes a slick black theme and a nifty program launcher. It’s designed to run on the HP Mini 1000, but you may be able to install the operating system on other computers with similar hardware by creating a system restore disk. But if you want, you can also install the theme on almost any computer running a standard version of Ubuntu. You won’t the program launcher this way, but you will get the custom black theme as well as a skin for Firefox. If you’re tired of Ubuntu’s brown and orange, you might like this look.

Linux on the HP 2133 has put together a handy guide complete with download links. I’d highly rcommend using these download links instead of attempting to add the HP repositories, because it turns out that the HP repositories are built for LPIA architectures. LPIA is similar to i386, but the difference might make it difficult to download the proper files using the Synaptic package manager or apt-get.

It’s also worth pointing out that while I’m still pretty excited about the HP Mini 1000 Mi Edition software, I do find that the computer is a little less responsive when launching programs than it was under Windows XP. It still boots, shuts down, and resumes from sleep pretty quickly. But it’s a tad on the sluggish side. My guess is if you have a stock version of Ubuntu installed and download the custom HP skin you won’t experience any slowdowns, but let me know if I’m wrong.

via HP 2133 Guide and Ubuntu Forums

10 replies on “Update: How to install the HP Mi Edition theme on any Ubuntu system”