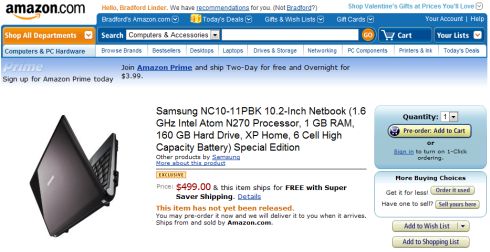 Amazon is taking preorders for a new special edition version of the Samsung NC10 netbook.

has a few things going for it. First, it comes in black, which is a color that’s been kind of hard to get in the US. But it also has a larger touchpad than earlier models and a higher capacity 5900mAh 6-cell battery, which Samsung says is good for up to 9.4 hours.

Unlike the original NC10, which has a matte screen, the special edition has a glossy screen, which is going to be a bit of a mixed bag. Some people like glossy screens and think they look, I don’t know, shinier I guess. But they tend to be harder to read outdoors or other places where glare is an issue. And they’re fingerprint magnets. It would be nice if you could choose between the new features and select a netbook with a larger touchpad and battery and a matte screen. But that doesn’t seem to be an option right now.

If you’d rather save $50 and pick up a Samsung NC10 with the lower capacity battery (still good for 7 hours), smaller touchpad and matte screen, Amazon is selling the original NC10 for $445

Update: Photos of the new touchpad are now available.

via Portable Monkey and MyHPMini