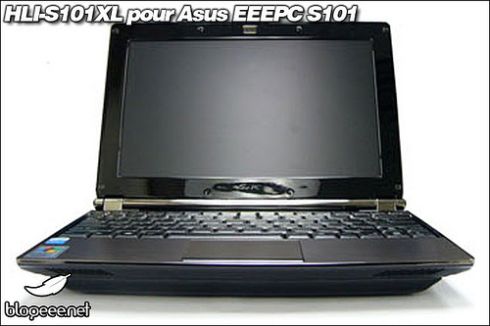 Some netbooks like the Asus Eee PC 900 or 1000H or the MSI Wind seem like they’re built for third party batteries. Since the batteries Asus and MSI ship with these mini-laptops already stick out from the bottom or back of the unit, it’s not that hard for third party battery makers to create extended batteries that provide extra run time while jutting out just a little further.

But when it comes to super-slim machines like the Asus Eee PC S101 or HP Mini 1000 things are a little trickier. Both of these laptops have batteries that sit flush with the bottom of the netbook. That hasn’t stopped battery maker Mugen from developing extended batteries for these devices. Blogeee reports that Mugen has come out with an 11,200 mAh batteries for the Eee PC S101 called the HLI-S101XL. The unit plugs into the computer’s battery compartment, but sticks out like a sore thumb. So Mugen has added a couple of legs that extend from the battery so that essentially what you wind up with is a computer that’s both thicker than an original Eee PC S101 and has significantly more run time. Of course, at that rate, maybe you should just get a chunkier and cheaper netbook in the first place.

You can check out a picture of the extendable legs after the break.

Mugen also has a high capacity battery for the HP Mini 1000 called the HLI-M1000XL which looks jsut about as ugly as the 6-cell battery HP created for this netbook. The company also makes extended batteries for a number of other netbooks, UMPCs, and cellphones. 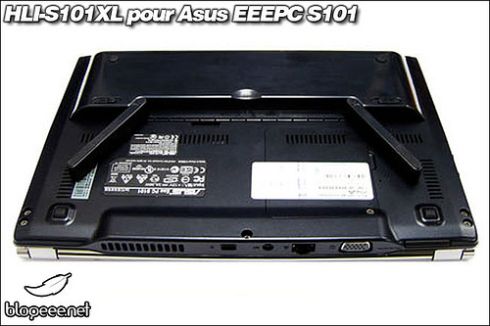