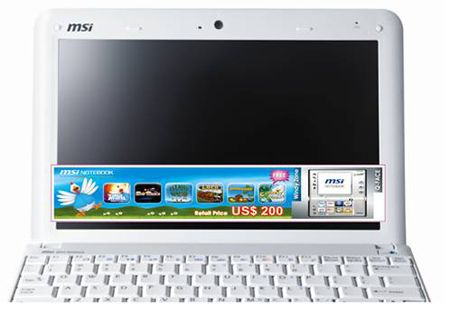 MSI is launching a “Windy Zone” software pack for MSI Wind U100 and U90 users. There are currently 6 games and one rather useless app called MSI Q-Face that lets you add cheesy effects to your instant messaging icon.

The gamepack actually looks like it could be fun. The games include a few scrolling space shooters like Chicken Invader and Star Mission, and some other games that I can’t really tell much about from the images, including Chicken Shake, Island War, Loco, and Smileyville.

MSI doesn’t say where you can get the Windy Zone software, so it’s likely that the apps will be preloaded on future netbooks rather than posted online for download. Some members of the MSI Wind.net forums noticed a similar offer a few months back, but the web page was taken down before any games were ever released. MSI’s latest announcement is dated today, which could mean the software wasn’t ready to ship in December, but should be available soon. I think?