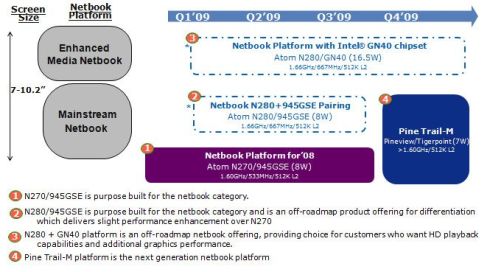 When I spotted one of the first netbooks with the new Intel Atom N280 at CES, it was paired with Intel’s new GN40 chipset which provides hardware decoding for 720p HD videos. And so I, like a lot of other people, assumed that the N280 chip would always be bundled with the GN40 chipset.

But the folks at Laptop Magazine have gotten their hands on a pre-release Eee PC 1000HE with an Intel Atom N280 processor and it uses Intel’s older 945GSE chipset. The CPU is .06MHz faster than the Intel Atom N270 that’s used in most HP, Acer, Asus, Lenovo, Dell, and MSI netbooks today. And it has a faster front side bus. But without the new chipset, that’s about it.

Still, according to Laptop Magazine, the Eee PC 1000HE is capable of playing 720p videos without any problems.

So for now it looks like Intel will be shipping the Intel atom N280 processor with two different chipsets: 945GSE and GN40. HKEPC has posted a product roadmap that seems to confirm this. It also indicates that the GN40 chipset may be consume more power than the 945GSE chipset, which shouldn’t be surprising as it’s designed for improved multimedia performance.