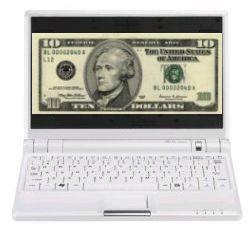 Indian officials formally unveiled their plans to create a $10 laptop today. And by unveiled, I mean they gave the project a name and confirmed everything that was already revealed last week but failed to produce a prototype or even a picture of a mockup stored in someone’s closet.

The laptop will reportedly cost closer to $20 at launch, but the time it goes into production in six months, officials are hoping to bring the price down to $10. The machine will be called the Sakshat laptop, and it will have 2GB of storage, built in WiFi and Ethernet, and it will use just 2 watts of electricity. And it may or may not be real. Information Week reports that some Indian critics have noted that the announcement comes shortly before elections, and $10 laptops developed by the government sure sounds like a nice campaign promise.