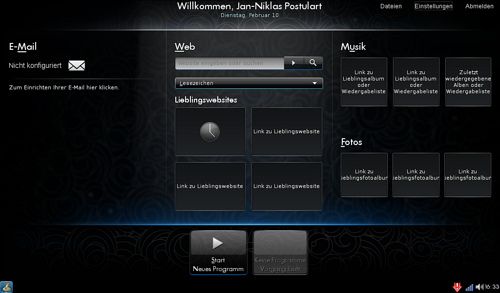 The HP Mini 1000 Mi Edition features a unique interface that makes the mini-laptop user friendly for users who aren’t familiar with Linux, or even computers. I spoke with an official from HP yesterday, and he said the idea was to create an interface that’s intuitive and easy to use. When I asked why there’s no taskbar or gnome-panel along the bottom of the unit showing a list of running programs, he said that HP decided to go with a larger panel that makes it easier to see which program are running instead. In order to pull up that menu though, you need to either go to the home screen, hit Alt+Tab, or click on an icon that hangs out below program windows — you know, where you’d normally find a taskbar.

The paradigm does have some problems. For instance, since there’s no taskbar, there’s no visual notification when you receive a new message from chat program Pidgin if you’re busy surfing the web in Firefox. But aside from a few quirks, the HP Mini 1000 Mi Edition offers a compelling user experience. And for the last week or so, people have been trying to figure out how to get it to run properly on non-HP hardware.

As I mentioned the other day, Adam McDaniel is working on a method for creating a LiveUSB that will let you run the software without reformatting your hard drive. But German site Netbook News has found another way. Since Mi Edition is built on Ubuntu 8.04.1, you can install a series of packages on Eeebuntu, Easy Peasy, or another Ubuntu-based distribution to effectively turn Ubuntu into Mi Edition.

Basically what you need to download are a series of packages that change the theme and desktop background, and an application called harbor-launcher that works as a program launcher. You can also install Elisa, which is an open source media player that looks a lot like Apple’s Front Row. HP calls the program HP MediaStyle, but it’s basically Elisa.