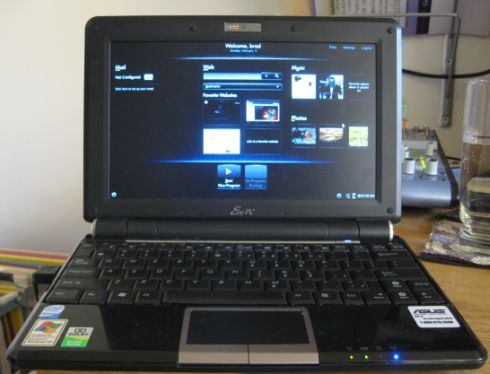 For the past few days I’ve been helping Adam McDaniel debug a system for building a LiveUSB from the HP Mini 1000 Mi Edition installer. Basically, Mi Edition is a custom version of Ubuntu with a slick black theme and a bunch of customizations that make Ubuntu a bit more user friendly for Linux newbies. The installer is available for anyone to download, but the only hardware that’s officially supported is the HP Mini 1000.

As we’ve seen, you can install the operating system on some other netbooks, but you may have problems getting wireless, audio, or other hardware to work properly. The installer also reformats your hard drive, which means you’ll lose any data currently on your netbook if you use the HP installation tool. And that’s where the LiveUSB comes in. It will let you run HP’s Mi Edition operating system from a USB flash drive or an SD card without deleting any data on your hard drive or SSD. This is a persistent install, which means changes will be saved to your flash drive. And with a little tweaking, you could probably follow the same steps to make a dual boot system.

Adam is the developer of the Array kernel for the Eee PC, which adds support for most Eee PC netbooks to the Ubuntu kernel. He’s figured out how to use the same kernel for Mi Edition, which means that not only can you boot Mi Edition from a USB stick, but you can use that stick on a variety of different netbooks with full support for WiFi, audio, the webcam, and other hardware.

We’re still working out a few kinks. For example, after a number of attempts I was finally able to boot the software off an SD card with my Eee PC 1000H this afternoon. But the WiFi module didn’t load automatically. We were able to load it by typing a short command into a terminal window. But ideally the wireless should be available when you boot the computer.

Once we have that issue worked out we’ll publish a complete set of instructions that anyone can follow to make their own LiveUSB. It’s a little complicated, and Adam may wrap the steps into a script later, but until we get some feedback from people using different devices, we want to be careful. Hopefully we’ll be ready to share the details in the next few days. But I was just too excited about this project to hold off on posting a picture of my Eee PC running Mi Edition.