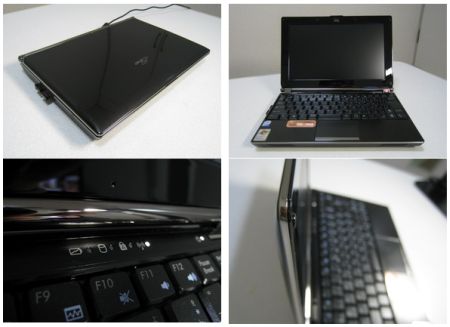 The Asus Eee PC S101H was released in Japan this week. On paper, the netbook isn’t much difference from the Asus Eee PC S101. But the new model has a hard drive instead of a solid state disk, and it’s a little thicker than the S101.

Portable Monkey has a review of the new mini-laptop. The computer is more professional looking than cheaper netbooks from Asus like the Eee PC 901 or Eee PC 1000H. But Portable Monkey reports the display isn’t as bright as 10 inch displays on other netbooks, and that the viewing angles aren’t as good.

The Eee PC S101H does support virtual screen resolutions (with scrolling) of up to 1920 x 1080, which is a departure from earlier Eee PC netbook models. The keyboard, speakers, and other hardware all seem to pass muster, but one major compromise Asus made with the Eee PC S101H is a lower capacity battery than you’ll find on many other Asus netbooks. The 2 cell 4200mAh battery does provide 3 to 4 hours of battery life, which isn’t bad by full sized notebook standards. But at a time when other netbooks are offering 5 to 8 hours of battery life, it feels a bit silly to pick up a pricier netbook which can only run for half the time.